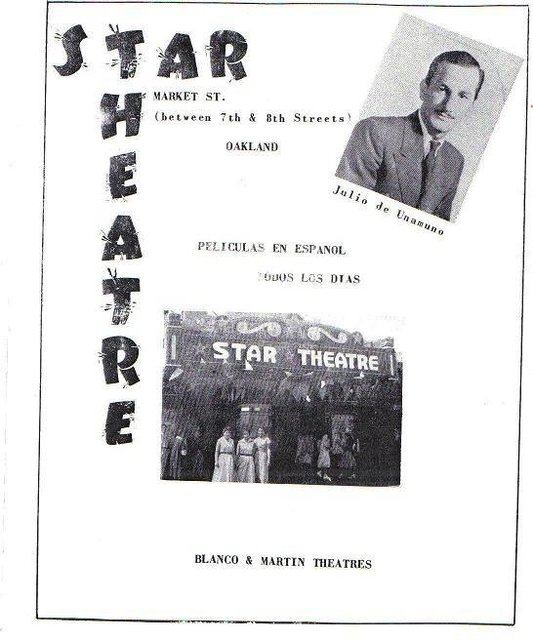 The Marquee Theatre was opened by 1914. It was renamed Arabian Theatre in 1930. In 1937 it was renamed Star Theatre and began screening Mexican movies from 1947. It was closed in 1962 and was demolished.

i,ve been studying the history of mexicans in oakland and i recently found out from old timers from this neighborhood that this theater began showing mexican movies around world war 2 all the way till it closed down i actually have a poster that i found at the oakland library that proves this the poster ses it plays mexican movies of such old shool artist like pedro infante and jorge negrette this area were this theater once stood used to be a mexican neighborhood

In 1956 when my family and I immigrated to Oakland from Mexico we lived at the hotel above the Star Theatre. It featured great movies from “La Epoca de Oro” with stars like Pedro Infante and Dolores Del Rio. It also had live performers like Miguel Aceves Mejia appearing in concert. They had bingo and toy raffles during Xmas. It closed not too long after that and business went to the Plaza Theatre just south of Lake Merritt. I remember my friend Greg and I(Lowell Jr. High students) roaming inside the vacant and dilapidated building around ‘62 or '63. I saw the theatre’s sign in front of an upholstery business on E-14th around 45th or 46th avenue years and years later, I believe its gone now. Does anyone remember the name the name of that hotel? It had bothered me for years. Thanks, Angel

The vertical sign of the Star Theater was saved after demolition. It was re-installed on the front of the building of what was called Star Upholstery, on East 14th Street in between 45th and 46th Avenue. At night it was well lit in all its glory. Through the years the sign just wore down, paint and all, to just a bare metal sign. The building has since been demolished.

Indeed, the Marquee is listed in the 1914-1915 American Motion Picture Directory, so might well have been opened even earlier.