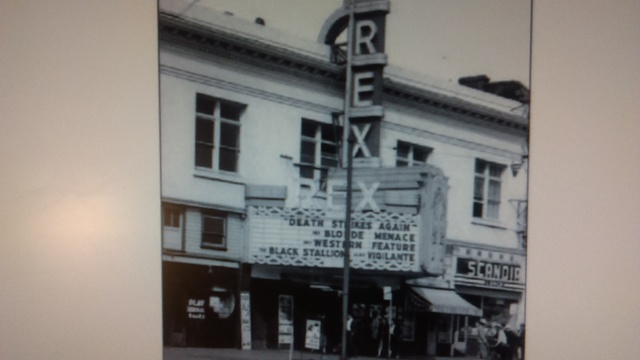 The Rex opened (initially on 1005 Broadway; a later change in Oakland’s address numbering system changed the address to 1011) as the Marlowe in 1908, renamed Imperial in 1916, and finally the Rex in 1934; it was closed in 1962 and demolished for a parking lot (since itself replaced by the Oakland Marriott).

In its final years, this place was an absolute wreck. It was dirty and foul with broken seats and some very questionable patrons. I am surprised it didn’t cave in on itself long before the wrecking ball arrived. However, it had the advantage of being located near the Kress store, where very inexpensive candy was offered from the bulk bins.

Over the history of film exhibition. There were theatres that were called negro theatres. That served the Afro-American population in this country. At one time this theatre was listed as one of them.

The Rex was the only downtown Oakland theater I was never in. It looked like a dump from the outside and I never felt brave enough to enter, even if they were showing some old Flash Gordon movie I wanted to see. When I joined the Army in 1959, three of us enlistees shared an Army provided hotel room in downtown Oakland before reporting to the induction center. I headed to the Central but the other two guys decided to catch an American International horror program at the Rex. When they came back they confirmed what I suspected. “What a dump!” they said. According to them, there was more horror in the audience than on the screen and they had also some insect bites as a souvenir of the majestic Rex!

For those of us who grew up in downtown Oakland in the fifties and sixties, the Rex offered a bargain Saturday matinee. We could enjoy 3 sci-fi or horror movies for only a quarter. We didn’t notice any problems with the audience or the building.

The manager of the Rex had a patch over one eye. He saved me movie posters in the mid 1960’s when I was in High School. To go to the Rex, Lux and Broadway seemed like a danger place to be. But know certain streets in San francisco are far worst. To bad the little theatres are not still open in downtown Oakland. They can still show second run films. Kids today go to the Multiplex and miss the Grindhouse feel these Oakland Theatres projected.

Here is an undated photo of the Rex:
http://snipurl.com/1x4ts

TCM ran a program titled “Brother Can You Spare A Dream” this evening. It was about the birth of the motion picture industry & moguls in California, through 1939.

One of the early black film pioneers was profiled as well, and the segment was accompanied by an old photo of a building adorned with signage that read simply “Rex Theatre For Colored People”. There was no marquee, just painted signs above the doors of a two story building.

William’s 2004 comments make it possible that this might be the same theatre.

The Rex looked a little rough as did it’s customers. By contrast, the Broadway and the Lux were upscale venues. I might have ventured into the Rex a time or two.