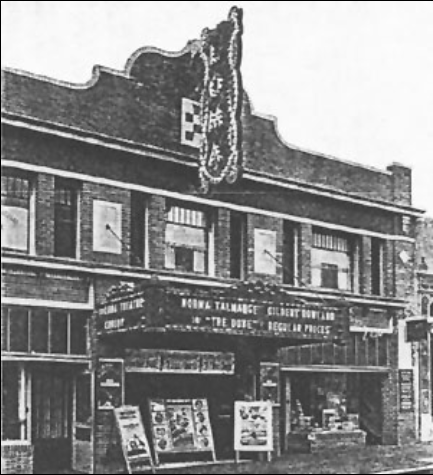 The Loma Theatre was opened by 1926. It was the first theatre in Burbank to be equipped for sound. It featured the Vitaphone sound system. The Loma Theatre lasted till the 1960’s, before being turned into an adult theatre. It was damaged in a 1971 earthquake and was razed a few years later.

Is this the Loma on the left?
View link

(Sorry for multiple posts, I’m posting info as I find it.)

Here’s the rear of the theatre:
View link

Reports in Boxoffice in August, 1963, said that Charles Minor had closed the Loma Theatre. Equipment from the house was advertised for sale in the classified section of the August 5 issue of Boxoffice. The ad said that the operators had lost the lease on the building.

From the Burbankia page, there’s the Loma on the left in this scan of “Ranchos De Los Santos – The Story of Burbank” from 1927
View link

Cinematour has a couple of photos that used to be on the Bijou Manager site:
http://www.cinematour.com/tour/us/16017.html

The Burbankia page has a photo of an unknown theatre in 1917. Don’t know whether it showed movies or if it was just a tiny live theatre, but thought I’d put it here, since it’s at least nearby and a similar vintage.

San Fernando Rd. looking in the other direction

Info on the mystery Burbank theatre from my above post:

“8/24/11 – Thanks to Sue Baldaseroni of the Burbank Historical Society, we now have some information about an unknown theater and sign on San Fernando Rd. that puzzled Mike and I. (A detail from the DeLos Wilbur photo from Feb. 1917 is here). According to Sue: "This was Burbank’s first moving picture theatre and was run by George Wood as an adjunct of his general store which kept open at night. Watland Wood remembers when his father took tickets at the picture show, he also would run to the store to wait on customers, and also squirted gasoline into the gas engine to keep the lights from dousing. It was mainly films of Cowboys and Indians shown in the first years. MJ (Mary Jane Strickland) said the lighted sign was for the store, not sure but thought it was a chicken or rooster but can’t remember for sure.” So there you are – it’s a bird of some kind. I still can’t make it out. We’ve determined by looking at later photos that the building still stands; the theater was where the Fantasia Billiards Hall is now located at 133 N. San Fernando."

For the record.. “Bijou Memories” is back and hosted on Blogger. I am currently rewriting and dramatically expanding the articles with new photos, newspaper ads and posters. You can view the page on the Loma Theatre here at http://bijoumemories.blogspot.com/2017/07/the-loma-theatre.html Feel free to visit and leave a comment if you’d like. Right now there are only three theatre articles available but more are coming. Please enjoy!

drb:The unknown theatre you mention in your July & December 2011 comments above is the Rose Theatre which now has its own page on Cinema Treasures.