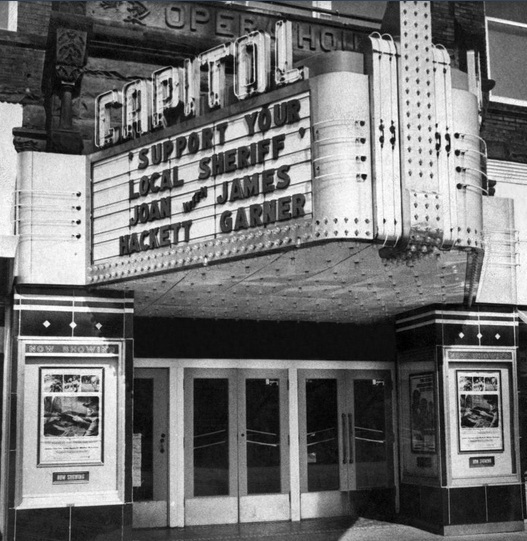 The Canton Opera House opened on the town square in dowtown Canton in 1891, designed in sturdy Neo-Romanesque style, including a large arched entranceway. In the 1920’s, the opera house was transformed into the Capitol Theatre, a movie house.

After closing as a movie theatre sometime in the 1980’s, the former lobby space was converted into retail space, and the auditorium used as a storage area.

In 2000, the historic building was converted into offices, and its exterior restored, including the removal of the boxy Capitol marquee and the addition of awnings over the ground floor level windows. The building became known as the Opera House Professional Center. It was demolished in October 2017.

Would the owner of this theatre or someone they know be interested in purchasing the theatre I have listed in Havana, IL? There is possibly money available from the city for restoration on this property. I have it listed at $79,900. Please email me if you would like more info. Thanks. Rhonda Howard, Jim Maloof/REALTOR.

The Opera House in Canton IL is listed in the 1897-98 edition of the Julius Cahn Official Theatrical Guide. Unfortunatly, there are no street addresses in this guide. The theatre is referred to as “Opera House” and also as “Armory Opera House”. Is it this theatre ? The seating capacity was 800 and it was on the second floor. C. N. Hinkler was Mgr. The proscenium opening was 20 feet high, and the stage was 25 feet deep. The house had both gas and electric illumination. There was a piano, but no orchestra. Hotels for show folk were the Canton House and the Churchill House, and local papers were the Register, Cantonian, and Ledger. Railroads were the TP&W and the CB&Q. The 1897 population of Canton was 10,000.

When the Capitol’s lobby—with no serious remodeling; how cool!—was being used as a record store, the auditorium was used for storage. During the restoration of the Opera House building, the auditorium was demolished—but the building still looks the same from the front.

This building, recently housing offices, was badly damaged in a nearby gas explosion. According to the Chicago Tribune:

“Among buildings damaged by the blast was a historic century Opera House that now houses offices; it was among three buildings condemned because they are beyond repair, Canton police chief Rick Nichols said.”

The Opera house was demolished in October of 2017 it is an empty lot now.