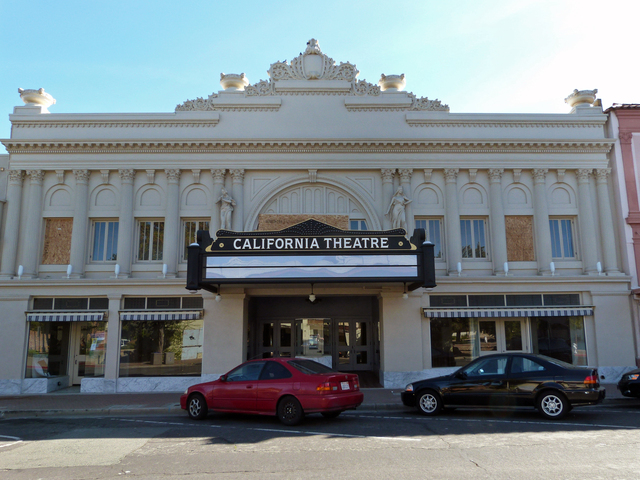 At 6:45 PM, on Tuesday, May 4th, 1920, the California Theatre opened its doors for the first time and hosted a gala event. The theatre cost $65,000 to build, and was a landmark for Pittsburg, showing the best in Hollywood films and booking entertaining vaudeville acts. There was a constant supply of live performances available, and was a stomping ground for many performers in, among others, the Fox vaudeville circuit.

The California Theatre sat unattended and empty since the week of February 15th, 1954. Because of inattention the theatre suffered extensive damage to the inside of the auditorium, including fallen plaster, lost artwork on the walls, and sagging and weakening throughout the main hall. Any vestige of being a movie house is gone; no seats, no movie screen, no projectors. The original marquee was removed in 1975.

The City of Pittsburg dedicated funds to renovate the theatre as a community-based performing arts venue. In June 2011, the city council approved fast track funding, to allow for restoration. A replica of the 1920 marquee was installed in 2010. The community envisioned that the theatre will bring in desired business and commerce to the area. It has dedicated itself to revitalize downtown Pittsburg, and has been successful in beautifying the downtown area.

The Enea brothers and David Solario constructed the Pittsburg Palace Theatre about 1910. Demolished in the early 1970s. The California is now (2012) being refurbished for a May, 2012 re-opening. Due to California’s budget woes, the theatre restoration budget has been reduced to about $6 million. More than $20 million, I was told, was needed for a first rate job. The 3/10 Robert Morton sits in storage about one mile away. As of January, 2012, the Pittsburg city council and mayor have pushed to have the organ reinstalled. It had been threatened by a HVAC plan that wanted the air handling system placed (you guessed it..!)in the organ chambers. Preservation advocate Tom LaFleur has pushed for the organ installation and costs should be largely covered thru private donations.BTW—a nephew of the Enea brothers (theatre owners) played the original Smith 2/11 in the Twenties and later did intermissions in the Thirties on the Morton.

An important element in the development of any communities' culture lies in the local theater. It is a pleasure to see not just a resto-mod but a full restoration performed on the crown jewel of downtown Pittsburg. This commitment to cultivating good times in the downtown area demonstrates our level of commitment to quality of life in Pittsburg, CA.

Does the marquee light up at night? Is there a current website?

I lost track of this one. The California Theatre officially reopened on January 19, 2013, and is now slated to be the home of the Pittsburg Community Theatre. The closest thing I can find to an official web site for the theater itself is its Facebook page, which has a few photos. There is some stud lighting crowning the marquee, but the attraction board does not appear to be lit from within. I can’t find any events currently scheduled.

We are OPEN and ready for business!

For rental or other inquiries contact me directly at:

What a BEAUTIFUL theatre! Congratulations on re-opening and the ongoing restoration! I must pay this a visit when I’m in town.

“The Encyclopedia of the American Theatre Organ” by David L. Junchen lists a two manual, nine rank Smith organ as being installed in the California Theatre in Pittsburgh (sic!) California, in 1924. The blower serial number was/is 15874.

Judging from the comments on here, it appears that the Smith organ was replaced at some point by a three-manual, 10-rank Robert Morton organ which still exists and might be reinstalled in the theatre (IHope Ihope Ihope Ihope). I can hardly think of a better home for the organ, or a better organ for the theatre!

Robert-Morton organs generally get a lot more respect from theatre organ aficionados than Smith organs do, and they are high-quality instruments and deserve this respect.

Visiting organists should be satisfied with the Robert-Morton installation, if it is done well (and I hope it is done well, without ruining the instrument).

Anyway, I happen to personally really like Smith organs, and so am curious what became of the aforementioned earlier organ.

Thanks a lot,
Andrew

UPDATE: I have found out what happened to the California Theatre’s original Smith theatre pipe organ. This information is courtesy of the excellent Puget Sound Theatre Organ Society (PSTOS) website. In my opinion, ALL chapters of the American Theatre Organ Society should have a website that is so detailed and well-laid-out! Anyway, here’s the page on the organ, with photos: http://pstos.org/instruments/wa/bellingham/fox.htm

And, here’s the info from that page: “According to Jeff Fox, the organ was originally installed in the California Theatre, Pittsburgh California. The Robert Morton Company took the organ in on trade when they sold a new 3/10 Morton to the theatre. The organ sat in their [Robert-Morton’s] warehouse for several years until 1930-31 when it was sold to Our Saviour’s Lutheran Church in Bellingham [Washington]. Seattle organ firm Balcom & Provorse did the install at the church and Ed Ahern of Bellingham was organist for the dedication program.

Jeff Fox purchased the organ in 1985. All of the original percussions except chimes were missing so Jeff has added a Wurlitzer toy counter and xylophone. He also added a blower that once supplied the Seattle Blue Mouse Theatre Wurlitzer. The organ’s original blower [Spencer blower #15874, according to Mr. Junchen’s book] still supplies air for the 2/12 E.M. Skinner organ now installed at the church."

also: “In 2003 the instrument was sold to Mark Steen of Spanaway, Washington. The Wurlitzer toy counter [not original to this organ] was purchased by Tom Blackwell of Seattle.”

I’m very glad to hear this organ (mostly) still exists, is in a good home and has been well-loved for most of its life. I hope it will continue to sing on into the future, whether in a home or in a theatre.

Work on the theater organ restoration is proceeding well but they do need additional funds. IF YOU’RE INTERESTED For more information, call Tom LaFleur at Pacific Community Services Inc. at 925-439-1056 or visit www.californiatheatreorgan.org If you are interested in making a financial donation, make checks payable to PCSI with a notation for the Organ Project and mail to: Pacific Community Services Inc., 329 Railroad Ave., Pittsburg, CA 94565.

The 1928 Robert Morton console is scheduled to return to Pittsburg’s California Theatre next week (the first of December 2018). For 6 years, beginning January 15, 2019, Dave Moreno has led a volunteer crew sponsored by Pacific Community Services, Inc. that has rebuilt the chambers, chests, pipes and percussions and installed them into the theatre. In December of 1916 using the 2 manual Wurlitzer “Red Devil” console donated by Steve Restivo and electronics from Paul Brown with playback record function by Julie Porter, Dave Moreno played the Christmas program for Pittsburg Community Theatre.

An Orchestral Oboe has been added to the original 1928 10 Morton. The Robert Morton 3 manual console is receiving syndyne stops and is near completion. A lift has been installed under the thrust stage covering the orchestra pit to house the console. Cost of the restoration project to date has been $123,656 and we still have $498.92 left in the bank!

The organ has a beautiful sound and it is returned to the beautiful and historic theatre where it started out new. It will play in its original home for many years to come, thanks to those generous supporters and volunteers who have made the project possible.

I just visited this theatre. They are starting to show movies here and there, along with live performances. The theatre has reinstalled the organ and I got to hear it played this past sunday. I made a video: https://youtu.be/7d6T6QqajZ0