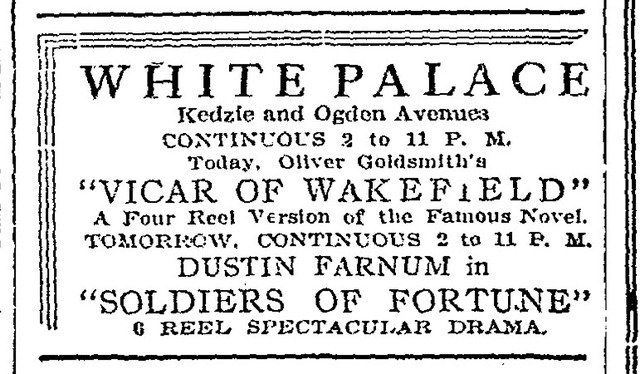 Opened in 1910, the White Palace was located on Kedzie Avenue near 16th Street, near Douglas Park in the North Lawndale neighborhood. It could seat around 750.

The White Palace originally served as a vaudeville house, and later became a movie house. It was closed in 1960, and had long since been torn down.

The White Palace must have been in operation prior to 1910, possibly under a different name. The “Building Permits” column of the January 15, 1910, issue of The Economist noted the planned remodeling and expansion of a theater at 1607-1613 S. Kedzie Avenue. The architect was Alexander L. Levy, eventually to be designer of at least a dozen other theaters in Chicago.

The 1913 Polk’s City Directory notes that Barney Balaban was operating the White Palace in that year. (Balaban Brothers)