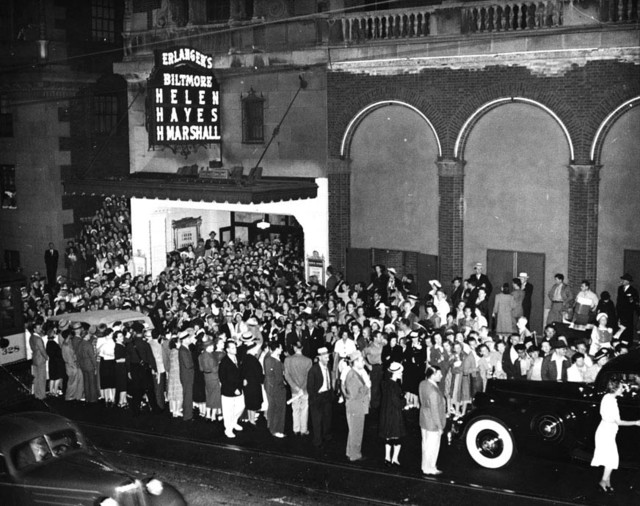 The Biltmore Theatre was built in 1923/1924 and was constructed as part of the famed Biltmore Hotel in downtown Los Angeles. It was connected to the hotel by an arcade, and had its own entrance on W. 5th Street at the corner of S. Grand Avenue. It was designed together with the hotel by New York based architects Leonard Schultze and S. Fullerton Weaver who were also the architects for the 12-storied Commercial Trust & Savings Bank building at 7th Street and Spring Street (later renamed Bank of Italy followed by Bank of America), and the Waldorf Astoria Hotel in New York. Interior decorations for the Biltmore Theatre were by John B. Smeraldi, who had Anthony B. Heinsbergen working for him as one of his apprentices.

The Biltmore Theatre was opened on March 3, 1924 with a Ziegfeld production of “Sally” starring Leon Errol. Will Rogers was the master of ceremonies for the prologue “Sally, Irene and Mary” on opening night. The Biltmore Theatre was under the direction of the Erlanger circuit management headed by Abraham Lincoln Erlanger, who also operated the Mason Opera House (later Mason Theatre) on S. Broadway. Early hits at the theatre included “The Laughing Lady with Ethel Barrymore, "Little Miss Bluebird” with Eric Blore & Irene Bordoni, “Merton of the Movies” with Glenn Hunter and John Golden’s production of “Lightning”. The theatre hosted many Broadway hits over the years including the Four Marx Brothers in their stage production of “Coconuts” and was considered Los Angeles premier downtown live theatre.

Like many legitimate theatres across the country, the Biltmore Theatre also screened some movies. In 1926 it presented a roadshow run of “Ben Hur:A Tale of the Christ” starring Ramon Novarro. This was a huge success and was followed by several more reserved seat ‘roadshow’ movie presentations, including being wired for sound for “Wings” which played for 5 months.

Meanwhile, back on the stage of the Biltmore Theatre in 1928 Bela Lugosi starred in “Dracula”, George Arlis was “The Merchant of Venice”, Jeanne Eagles in “Her Cardboard Lover” and Frederick March made his local debut in “The Royal Family”.

A.L. Erlanger continued to operate the Biltmore Theatre as a live theatre into the 1940’s. The theatre was closed on April 25, 1964 with a production of “Enter Laughing” starring Alan Arkin and Yvonne DeCarlo. It was purchased by a parking company who employed the Cleveland Wrecking Co. to demolish the theatre around October 1964. The land was used as a parking lot for many years. In the 1980’s a tower addition to the Biltmore Hotel was built on the site.

Wings (5 months), Ben Hur (3.5 months), Simba, Show Boat (with stars doing live prologue for multiple appearances), South Sea Adventures, and Broadway (world premiere) were among the huge film successes for the Biltmore Theater. “The Godless Girl” premiered with Cecil B. DeMille and his cast on hand. The combination of films interspersed with live productions proved challenging when live shows had to continually be pushed back to accommodate popular film runs. And underachievers could cause problems in the other direction so the film concept was discontinued early on.

Legitimate fare was the Biltmore’s bread and butter including the live show “Cocoanuts” starring the Marx Brothers and “Diamond Lil” with Mae West. “Sally” launched the Biltmore March 3, 1924 with Will Rogers as the emcee and Al Jolson singing “Mammy” prior to the main show. “Enter Laughing” with Alan Arkin and Yvonne DeCarlo ended the run of the Biltmore on April 25, 1964. The theater’s demise was expected as early as the 1950s when television and population shifts took its toll. The parking lot operator that bought the theater in 1960 said taxes would do in the theater as the theater would struggle to make its nut over the final three years closing our a forty-year run. Not bad!

The premier of “Wings” at the Biltmore was to be a low-key event, according to this belated item from the January 24, 1928 issue of Exhibitors Herald and Moving Picture World:

“HOLLYWOOD, Jan. 10.— There will be no Klieg lights or traffic jams at the Hollywood road show of ‘Wings’ at the Biltmore theatre January 15.

‘There will be none of the customary ballyhoo,’ says A. Griffith Grey, of the Paramount road show department, ‘and no invitations will be given to celebrities. The top price will be $2.20.’"