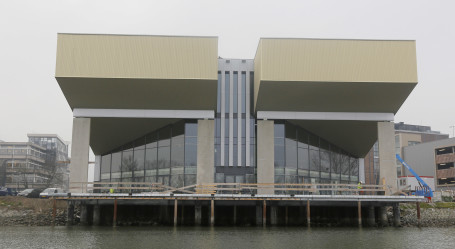 Kinepolis Dordrecht was a project initiated by the Wolff group, but after the takeover by Kinepolis it is the first new movie theatre in the Netherlands that opened with the name Kinepolis from the start on April 18th 2016.

Facts, figures and new updates: – I uploaded three new pictures of the cinema from different views during my visit at Dordrecht in August 2017. – On May the 5th the shows were paused for two minutes. In the Netherlands the victims of the Second Worldwar are reminded each year by two minutes of silence at 8 PM. source: ad.nl – Despite the good sales figures of the cinema, it is likely that the working conditions of the staff will be reduced. The fear is that other cinemas will follow. The trade unions stand their ground. source: dordrecht.net