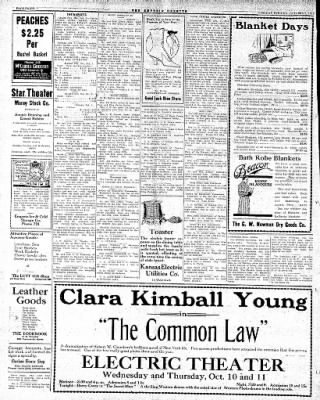 In 1911 the Electric Theater was one of three theaters listed in the Emporia Gazette as being operated by P.J. Concannon of the Emporia Photoplay Co. The others were the Elite Theater at 441 Commercial Street and the Whitley Opera House at 22 W. 6th Street. In 1917 Mr. Concannon signed a contract to bring pictures made by the combined Artcraft-Paramount Pictures to Emporia. Artcraft actors included Mary Pickford, Douglas Fairbanks, and director D.W. Griffith.

By 1919 the Electric Theater was owned by Harry McClure, who operated it until it closed in 1929, but projectionist Marion Kennedy remembered the Electric Theatre well. When the Gazette interviewed him in December 1948, he had already worked for 30 years at Emporia theaters and said he had seen over 4,000 movies.

Harry McClure hired Mr. Kennedy as popcorn boy at the Electric Theater in 1919 and by 1920 he began his career as an operator, working at the Strand Theater and Royal Theater. In 1929 he went to Mr. McClure’s Granada Theater where he was still at it in 1948.

The last year the Electric Theater was listed in Film Daily Year Book was 1929 with 400 seats.

The Thursday, August 31, 1911, issue of The Emporia Weekly Gazette said that P. J. Concannon’s Electric Theatre had opened for the fall and winter season the previous Saturday, and that it had been redecorated over the summer. A thumbnail biography of Concannon published in 1918 said that he had come to Emporia in 1910. It doesn’t say if he began operating the theater that year, or if he was the original owner of the house.