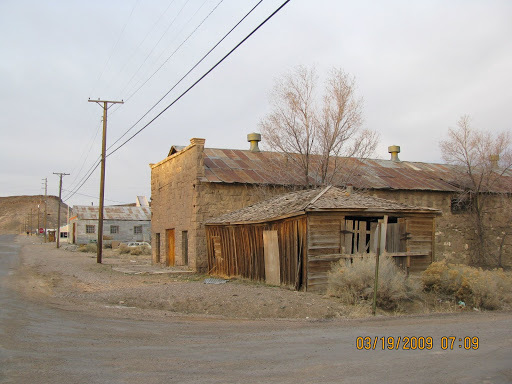 The Lyric Theatre was opened prior to 1914 when it was located at Main Street and Hall Street. In 1924 it was re-located to a 1908-built building on 5th Avenue and Ramsey Street which was enlarged to accommodate a 200-seat theatre.

Opened around 1924 with 200 seats. Location was Fifth avenue.

From what I’ve read it’s more likely to have been opened even earlier than 1924. The name of the town comes from the discovery of gold in 1902. The population quickly rose to 20,000 making it the largest community in Nevada. By 1910, when mining had become more difficult the population was down to 10,000. A 1923 fire caused by a still wiped out a large segment of the town. The Lyric, being made of stone survived.

An application was made to the National Parks Service in 1982 to create the Goldfield Historical District. The buildings are individually owned and maintained. There was mention in a 2015 meeting of the Historical Society that a mason had been hired to work on the side entrance of the Lyric.

A special Goldfield Historical Festival is held each August.

I have uploaded a picture of the Lyric when it was being used as a warehouse from a Picasa File by a “Jim N”.

This NATIONAL REGISTER OF HISTORIC PLACES INVENTORY – NOMINATION FORM states that “The original warehouse was modified twice during the historic period; once in 1908 when the length of the building was extended to its present size, and again ca.1924 when the height of the stone walls was increased to accommodate the buildings use as a movie theater”.

The building predates 1924, but the building was modified around 1924 for use as a movie theatre.

I now own the Lyric Theater and I am currently in the process of restoring it. It will take a while, but, it is a labor of love. Hoping to eventually open for special events and movie nights.

Tapgirl95: Any chance you can post pictures of the interior of the building?

Looks like a ghost town in the above photo.

Is the small wooden next to it on the right hand side part of it?