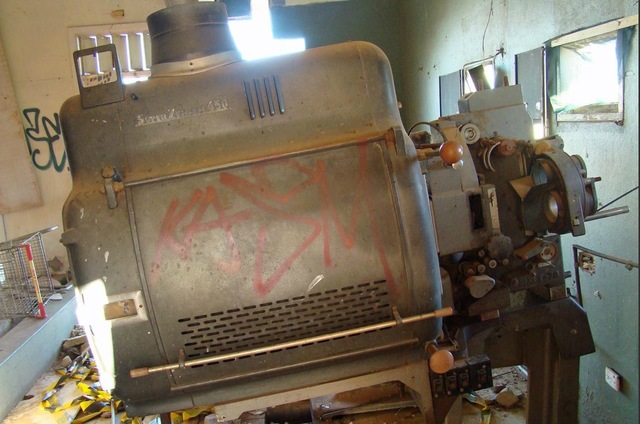 The Pioneer Drive-In opened on 28th January 1965 with Deborah Kerr in “The Sundowners”. It was renovated and renamed Starline Drive-In on 21st November 1974. It was closed on 28th November 1988. The drive-in was heritage listed in 2005. The site was planned to become a 88 lot housing estate and was was demolished on 8th June 2013.

Located on Stuart Highway opposite the racecourse.

The only remains of the Pioneer Drive-in now are the ramps, fences, entrance and exit roads and gates(one of them is oppisite the entrance(and exit?) of the racecourse(trotting club?). There could also be the bases of the screen, ticket box(or boxes?), snackbar and bio box too?

Opened on 28/1/ 1965 and closed on 28/11/1988. Also called Starline Drive-in. Screen moved(by volunteers) in pieces and put back up complete at Blatherskite Park with the aim reopening the drive-in(unknown if happened yet?).

Greg Lynch says : Alice Springs is a town almost dead center of Australia. Hot with very little rain it was the ideal spot to build a drive in theatre. To tell the story of The Pioneer Drive In Theatre one has to relate the legend of Snow Kenna, Picture Show Man. Leslie Joseph (Snow) Kenna began showing silent movies in the old Welfare Hall during 1934 together with Bill Burton. This continued until well known business identity Ly Underdown recognizing the possibility of this modern entertainment erected his Capitol Open Air Theatre, into which he installed Snow Kenna, Bill Burton and their projection plant. Later Bill Burton was to move on to Tennant Creek and open his own theatre. In 1939 Snow decided to build his own theatre. By now his bank balance was such that he was able to purchase a block of land in Parsons Street, where he was to fulfill the life long dream of running his own cinema. Snow named it “ The Pioneer Open Air Theatre.” The new theatre opened to excellent box office in 1942. Then in 28th January 1965, and with much foresight, Snow opened the Pioneer Drive In Theatre with the Warner Bros production of “The Sundowners”. The drive in theatre was located on a large block south of town on the Stuart Hwy. This had the unfortunate result of reducing attendance’s at his Pioneer open air, as picture goers changed their habits in favor of watching movies in the family car. Seven months after the opening of the drive in, Snow Kenna dies at the age of 68 (husband of Rose & father of John), leaving his family to carry on. In 1974 there was a name change from Pioneer to the Starline Drive In. Come 1983 and Rose Kenna sells both theatres to Greater Union Theatres, who run the open air till 1984, and the drive-in until 1988. On July 15, 2013, David Pearce wrote in The Film Journal retrospectively “On Sunday, Nov. 28, 1988, only two cars turned up for a screening of the double bill “Masquerade” and “A New Life”. The operator sent the two cars home, locked up the site, and closed the drive-in. Greater Union left the theatre as they found it, complete with projection plant rusting in the desert air. That would appear to have been the end of the story, but a local lobby group formed, Citizens for Outdoor Cinema in Alice Springs. They wanted the cinema to re-open. By the year 2000, they had managed to get the property shortlisted for a heritage order and finally earned one in 2005. What was on their side was the screen. This was a rare example of a white painted concrete screen for a drive-in. As weeds grew through the original parking area, the screen remained in pretty good condition. In 2011, the site was delisted as a heritage site and a developer announced plans to demolish the screen. The Citizens for Outdoor Cinema were told that they would have to raise A$60,000 to remove and relocate the old concrete screen. That never happened and in June 2013 (Queens Birthday Weekend) almost 25 years after the last screening, the Pioneer Drive-In finally died as the screen crashed down.“ end quote -The Pioneer Drive-In screen had been the last one standing in the Northern Territory – Leslie Joseph (Snow) Kenna, dedication – He was one of the financiers of the Alice Springs Memorial Club and was a member of the Central Australian Racing Club committee. A park is dedicated to the memory of Snow Kenna at the end of the footbridge where he originally showed films in the old Welfare Hall – Snow Kenna, Picture Show Man. This writer is indebted to local Tennant Creek identity & historian, Pam Hodges for her contribution to this article – Go to – for Tennant Creekers. http://fortennantcreekers.com/places/buildings/picture-theatres. Acknowledgement: David Pearce of "The Film Journal” –

Screen demolished on 8/6/2013. The company that demolished the screen, offered the group raising money move the screen, to come and take pieces of the screen(unknown if it hapoened?). The last standing drive-in screen in the Northern Territory

As of 2019 the land is still vacant, completely bare. Looks like development of the housing has halted. Also an approximate address is 400 Stuart Highway.

The last night of operation of this drive-in was on 28th November 1988. The 2 movies planned to be screened were “Masquerade” and “A new life”, but only 2 cars turned, so the operater sent them home and closed the drive-in.

I worked at the drive-in during 1971 when Rod Rose was the manager and he also ran the kiosk. Rod was also responsible for advertising and promotion. John Kenna kept an eye on things all the same. “Eddie” was the projectionist. It was a profitable business at the time. It could accommodate nearly 500 cars but I exceeded this number on only one occasion. The first night screening of the film “Airport”, saw queues back nearly into town! I crammed in as many cars as I could, not realising I was breaking the fire risk laws. Didn’t take long for the friendly police in Alice to inform me of what I was doing and I had to turn away dozens of cars. We screened the film for 5 days and filled the theatre every night. Of course in those days, Alice had a large contingent of Americans both at the USAF base and Pine Gap. The showing of “Airport”was not as profitable as it might have been as we had to pay the distributors 55% of the gross for the last two days instead of the agreed 30% for the first 3. Reason given was that as we were retaining the film longer than scheduled, another print had to be ordered to be sent to the theatres which were next on the list for their screening.