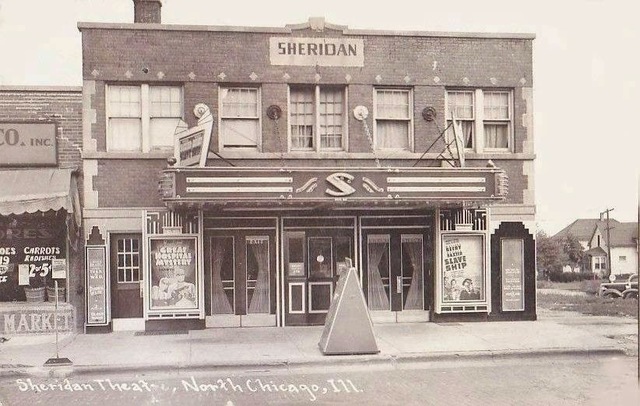 The Sheridan Theatre was opened on November 2, 1923 with Ruth Stonehouse in “Lights Out”. It was equipped with a Barton organ. Last operators were K&S Theatre who built the nearby Park Theatre which opened in 1948, and they immediately closed the Sheridan Theatre.

The building still stands in 2022, as a workshop for Majestic Tiles.

Address should be changed to 1643 Sheridan. “Demolished” status should be removed, as the building is still standing. It currently houses McAllister & Sons Signs. Same building as the 1938 photo I added. Below is a Flickr image of the building today.

Sidney Schatz passed away at 96 on April 2, 2009 at Balmoral Nursing Home in Lake Forest, IL where he resided after suffering a stroke eight years ago.

Born in New Hampton, IA on Jan. 14, 1913, his family moved to the south side of Chicago when he was eight years old. After working as a clerk for a stock broker, he managed a theatre in Chicago, which led to two of his life interests, investing in the stock market and owning a theatre.

He rented and operated the Sheridan Theatre in North Chicago, IL until he built the Park Theatre in 1947, which he owned for 23 years, after which he semi-retired and sold real estate part-time. He was a longtime member of Congregation Am Echod in Waukegan, IL and a former member of North Chicago Lions Club, North Chicago Chamber of Commerce, Lake County Board of Health and treasurer for North Chicago Little League.

Sidney was survived by his sons Marc (Carol Jakaitis) of Mequon, WI and David (Susan Gehlmann) of River Forest, IL; grandchildren Jeff, Dave (Angie Massen), Timm (JoellePolivy), Dan, Ben and Stephanie; and great-grandchildren Nate and Jon. He was preceded in death by Lois (Stein), his wife of 46 years, in 1984; his sisters Ann Harris and Pauline Peterson, and brother Milton Schatz.

Funeral service were at 11 a.m. Friday, April 10, 2009 at Peterson & Patch Funeral Home in Waukegan with Rabbi Ze'evHarari officiating, and interment at Memorial Park Cemetery in Skokie, IL. Memorials to the American Stroke Assn. are appreciated by the family.

In the SHERIDAN’s photos section here, its May 3, 1938 ad in the Waukegan News-Sun lists its address as 1701 Sheridan Road. Perhaps there was a reallocation of address numbers at some point?

Probably was a reallocation. Because the photo in the Flickr link in my first comment, is definitely the same building that today uses 1643.

The January 3, 1932, issue of The Film Daily said that an Ultraphone sound system had recently been installed in the Sheridan Theatre at North Chicago.

Opened on November 2, 1923 with the Midwest Premiere of Ruth Stonehouse in “Lights Out”, along with a performance by the theater’s Barton Grand Organ.