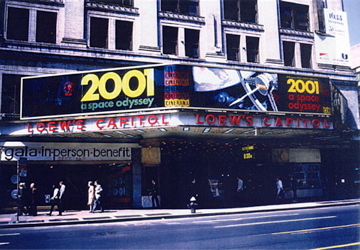 The Capitol Theatre was located where the Paramount Plaza stands today, directly across Broadway from the Winter Garden Theatre.

Opened October 24, 1919 with Douglas Fairbanks in “His Majesty, the American” (United Artists first production) plus on stage Ned Wayburn’s “Demi Tasse Revue” which featured Mae West early in her career. It was equipped with an Estey pipe organ which had a 4 manual console and 35 ranks opened by organist Dr. Mauro-Cottone Melchiorre. The Capitol Theatre, operated by Major Edward Bowes was initially not a great success and closed on June 1, 1920. It was taken over days later by Samuel Goldwyn who installed S.L. ‘Roxy’ Rothafel to program the theatre and it reopened with a Goldwyn picture “Scratch My Back” starring T. Roy Barnes. In July 1923 the Estey organ console was replaced by one with illuminated stops and a horseshoe design and 12 more ranks of pipes were added to the existing 35 ranks. It was advertised as ‘Broadway’s Finest Organ’.

It was taken over by Loew’s Inc. in 1924 and became the flagship movie palace for MGM Films. The Loew’s Capitol Theatre hosted world premiere’s of many now classic films. The theatre presented movies and stage shows except from 1935 to 1943 when no stage shows were included in the program. The shows were too expensive to produce during the Great Depression and were only revived when World War II brought an economic boom. In 1952 stage shows ceased to be held. A larger, 25ft x 60ft wide screen was installed for the June 1953 engagement of “Never Let Me Go” starring Clark Gable.

In 1959 the Loew’s Capitol Theatre was modernized to the plans of architect John J. McNamara and re-opened on December 25, 1959 with Yul Brynner in “Solomon and Sheba”. The movie palace became a Cinerama showplace in 1962 with a huge 33ft x 93ft wide screen.

Yes, when I was last in NYC I had to stand on the opposite corner and tried to imagine how wonderful it must have looked compared to now. The book “The best remaining seats” by Ben Hall celebrates the Roxy with good illustrations including the one with Gloria Swanson. It makes almost painful reading to think the “Cathedral of the Motion Picture” could not have been saved for future generations.

I believe the decline of midtown and Times Square began with the destruction of all the great buildings that were its anchor. Starting with the Roxy but really accelerating in the mid 60s.You had Penn Station, the old Met, the Paramount, the Astor, the Claridge, and the Capitol. People were avoiding the area because there was bleak construction going on seemingly on every other block, the streets were getting darker because of the skyscrapers going up and the middle class had no reason to go to midtown any more for entertainment bringing in the criminals and sleaze that the 70s an 80s were famous for. Of course the Disneyfication of the area that was to follow was even far worse than that. I was stunned that anything could be worse, but it was.

The Paramount had an office building (still existing) which presumably would have helped with costs whereas of course the Roxy and Capitol didn’t. Radio City was destined to go the same way but as we know was saved and still survives. I would imagine that with the huge numbers of tourists visiting the city the Roxy for instance would possibly survive today as a great attraction. Back in the days when these movie palaces were destroyed they relied almost exclusively on New Yorkers as the visitor numbers were a fraction of what they are now. I agree with vindanpar that unbelievably the Times Square area today is even worse than in the 70’s, sounds crazy but sadly it’s true I absolutely hate it.

For those who went to the Capitol during its reserved seat days what exactly were the divans? Were they the firsts rows of the mezzanine or loge?

They were the front rows of the upstairs section. My dad and I saw 2001 from the divans section in June 1968. Ticket price was a big $4, and it really was big at the time.

The last show of Windjammer was 6/23/64. Circus World premiered on 6/25/64. When did they expand the center Cinerama booth to include two 70mm projectors? Two days does not seem enough time to do that.

was the reissue of Windjammer which played the Capitol the Spring of 1964 in the 70MM process or the original 3-panel system.

Does anyone else remember the Japanese garden which replaced the back of the orchestra ? Thought it was great .Saw West and the 3 panel Cinerama was great. The buffalo stampede and climax of the train shootout were great.

Japanese garden on this page - https://incinerama.com/ctlowes.htm