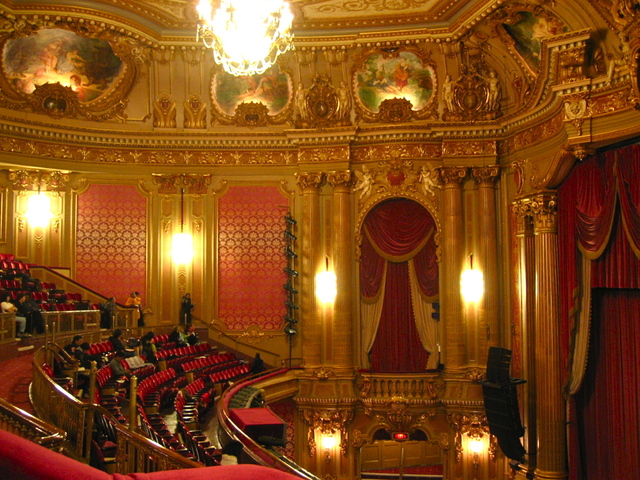 Designed by architect Thomas W. Lamb for Warner Brothers as a showcase for ‘talkie’ movies, the Hollywood Theatre was one of the last movie palaces to be built in mid-town Manhattan. The gala opening was on April 22, 1930 with the movie “Hold Everything”. Originally the main entry was a narrow Art Deco style lobby on Broadway, that cut through an office building, but by the mid-1930’s, the side entry on W. 51st Street had become the only entrance. Inspired by French Baroque and Rococo styles, the three story rotunda foyer and the 1,603 seat auditorium are exquisitely ornate and awesome, perfect for a Golden Age Hollywood movie palace. The theatre was built with a stage, but while showing movies did not present live entertainment.

In October, 1930, the Hollywood Theatre was the only New York theatre to employ Warner Bros. wide screen process, 65mm Vitascope, to show the feature film “Kismet”. Starting in 1934, during some years of the Great Depression, Warner Bros. leased out the theatre for stage shows and concerts, and during that time it was known as the 51st Street Theatre. During World War II, again known as the Hollywood Theatre, movies succeeded well here.

With a new name, though one that didn’t last long, the Warner Theatre, on August 15, 1947, hosted the world premiere of the movie version of “Life With Father”. On May 16, 1948, the Warner Theatre closed. The theatre was sold and the movie screen was removed. On January 22, 1949, the theatre reopened for stage shows with “All For Love”, renamed Mark Hellinger Theatre, after the producer. The Warner name was then transferred to the Strand Theatre at Broadway and W. 47th Street.

The Mark Hellinger Theatre hosted the Broadway musical “My Fair Lady” with Rex Harrison and Julie Andrews which opened here in 1956, and lasting for six years, was the first hugely successful stage show at this theatre. By the 1960’s, the theatre’s fortunes began to nosedive. The Nederlander Organization became the new owners in 1970. Some productions were less successful than others and the theatre barely eeked through the 1970’s and 1980’s. The last successful production was Mickey Rooney and Anne Miller in “Sugar Babes”, which ran from 1979 to 1982. The last production at the Mark Hellinger Theatre was Peter Allen’s “Legs Diamond” which closed in February 1989. The Nederlander Organization leased the theatre to a church group. Three years later, the building was sold for $17 million and became the home for the Times Square Church. The church has well maintained the theatre. Both the exterior and interior are protected by New York City landmark law.

The Hollywood became the Warner Theatre on August 15th, 1947, with the much anticipated film version of the long-running stage play, “Life With Father.” Advertising included a proclamation signed by NYC Mayor William O'Dwyer that “It is no more than fitting that the Broadway scene have a theatre bearing the name of the company so widely recognized for its great achievements in motion picture entertainment. Welcome, Warner Theatre!”

The sale of Broadway’s most beautiful theater was criminal. Nederlander probably pocketed a fortune with the sale and with all the tax breaks he was getting from the city for his theaters he should have been thrown right into jail for stealing taxpayers money.

Agreed, the sale of the Mark Hellinger was so shortsighted by the Nederlander Organization. $17 millions now seems a pittance for that kind of real estate; maybe it was even then (air rights, anyone?). The church can be commended for being a fine caretaker of the space, but the Broadway community would now kill these days for a theater that gorgeous and of that size to be able to house live theater again. By all rights, it should. A church can occupy just about any space it wants. Old Broadway houses once gone, are gone for good. They will never build a new comparable sized house with the same attention to detail and aesthetics. Unlikely the current owners of Times Square would ever sell the place back to one of the three big Broadway landlords, but if they do, they should ask for the moon.

The big three Broadway landlords are thrilled at the lack of competition. They would want no part of this theatre as it might lower ticket prices. That is why still have huge shut down theatre space on 42nd street.

There is always that British company that purchased the Apollo/Lyric, now the Lyric and, more recently, the Hudson. Why the Times Square still sits there undeveloped is a mystery.

Also, on the other side of 42nd is a theater whose lobby is being used as a restaurant but the auditorium on 41st is in tact and used for events. Forget the name.

That would be the Liberty, robboehm.

Despite an upsurge in pandemic conditions, the Times Square Church has been running commercials on all-news radio stations, identifying itself as located in the Mark Hellinger Theatre. Free church services are being held regularly and can be booked in advance at the phone number provided. No mention is made of health requirements, but presumably are the same as at all churches.

Although “Casablanca” didn’t premiere in New York (at the Hollywood) and other cities until the Thanksgiving season of late November, 1942, the 80th anniversary of its release is already being celebrated by Turner Classic Movies and Fathom Events with large screen theatre screenings on January 23rd and 26th. More details here