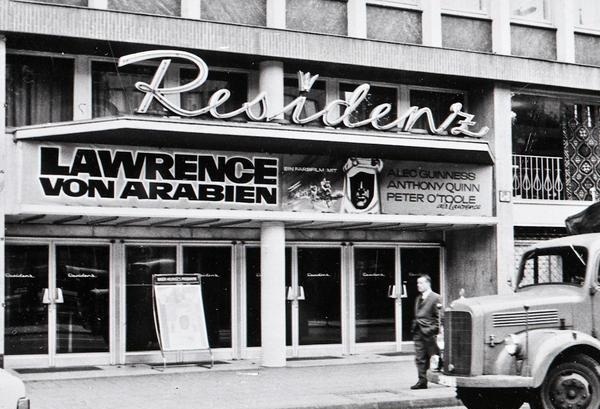 Located in the north of Cologne city centre. The 800-seat Residenz - Theater am Ring was opened on 2nd September 1950, operated by Adolf Schoofs. The cinema was designed by architect Hanns Ruttgers with 685-seats on a single floor. Three large domes were set along the centre of the auditorium ceiling, which contained hidden illumination. Many premieres of German and International films with guests took place here. In 1959 it was renovated to the plans of Dusseldorf based architect Ernst Huhn. New seats were by Kamphoener and it was enlarged to 820-seats. The sizer of the CinemaScope screen was 14.5 x 7.2 metres. The screen curtain was red and the walls of the auditorium were beige & grey. The ceiling was purple. A pair of U2 Universal projectors for 35mm & 70mm film, manufactures by Bauer were replaced by EX projectors by Ernemann. A six-channel stereophonic sound system was installed. The Koln premiers of “Lawrence of Arabia” & “My Fair Lady” and many other 70mm productions took place at the Residenz - Theater am Ring and ran for many months.

In 1965 a second auditorium with 365-seats was built on the first floor of the building, designed to the plans of architects Hans Nehaus & Heinz Weil. It was named Intime Theater. The size of the screen was 12 x 5 metres.

On 23rd May 1968 a 3-strip Cinerama projection system with a 7-channel stereophonic sound system was installed in the main auditorium. Around 1970 two more screes located in the back-yard were added. The original Screen 1 and the Intime Theatre were not touched and remained in their original condition. In 1979 a Sensurround system was installed in the original auditorium. In 1983 it was taken over by the Ufa Theater AG chain. The Residenz - Theater am Ring complex was closed on 19th March 2005. Between 2009 and 2011 it was used as a TV studio.

The Residenz was equipped in Todd-AO.