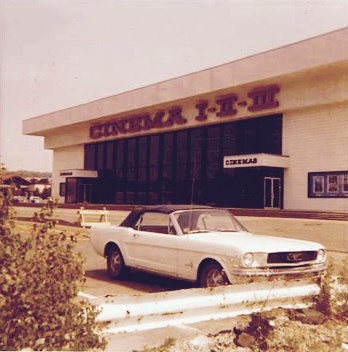 The South Shore Cinema 4 was a free standing building at the south side of South Shore Plaza Shopping Centre. It was opened as a twin Cinema I & II by General Cinema on November 16, 1966 with Rod Taylor in “The Liquidator” & Tony Curtis in “Not with My Wife You Don’t!”. It was closed in 1993 and has been demolished.

A new 10-screen theatre was built and opened nearby in 1993, which is now the AMC Braintree 10.

This cinema wasn’t literally in front of the South Shore Plaza- it was down at the south edge of the complex and was much closer to Granite St. than the plaza buildings which are set way in back. I seem to recall that after it closed it served as an electronics store for awhile.

NOV. 1966 OPENING, AS TWIN, WITH TOTAL SEATING 1134 THEATERS HAD STAGGERED SEATING AT THIS TIME

This cinema is the subject of the “Whatever Happened to…” feature in the Quincy Patriot Ledger, Nov. 13, 2019. There is a night exterior photo from 1966. The copy says that it opened as a twin on Nov. 16, 1966. About 1,000 people attended. Movies: “The Liquidator” and Tony Curtis in “Not With My Wife You Don’t”. There were 25 sets of young twins present. Run by General Cinemas, later by AMC. Closed in 1993 when a new AMC cinema opened across Granite Street. The building became a Circuit City electronics store, and is now a Dave & Buster’s. The article implies that the building was not demolished and still exists.

It is with sadness that I recently noted the passing of Dennis J. Mahaney, former manager at General Cinema Corporation, and my first boss at my first job at the South Shore Cinema in Braintree. Dennis passed away on February 13, 2020 at the age of 76. The obituary can be found at https://www.everettfuneral.com/obituary/Dennis-Mahaney. Dennis’s many contributions to this website are incalculable, and we can all be thankful for his keen interest and involvement. Cinema Treasures would not be what it is without him.

bob550: Thank you for sharing your sad news regarding Dennis J. Mahaney. His contributions to Cinema Treasures will remain as a testament to his passion for cinema buildings. Ken Roe, Volunteer Theatre Editor