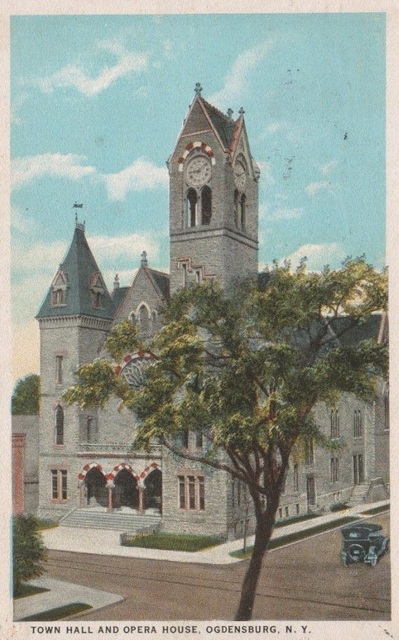 The pride of downtown was the Ogdensburg Opera House and Town Hall which was built in 1880/1 and opened on November 10, 1881. With stained glass patterned after the Reims Cathedral in France, the Opera House was a live venue much of its life but switched to films for its final 12 years.

In 1914, the Opera House was under pressure from the three existing movie theaters - the Star Theatre, Strand Theatre and Hippodrome Theatre. With live music shows not filling the 1,200 seat facility, it decided to convert to vaudeville and movies. The operator of the Hippodrome Theatre would convert it to full-time film operation in 1918. The town hall portion of the building was condemned in the early-1920’s as a fire hazard. An auspicious cautionary note for a building also housing a nitrate projection cinema.

The Opera House would screen films until January 22, 1926 when it suffered a major fire gutting the facility. It was demolished and replaced by a new town hall. Some of the stained glass, however, was salvaged.