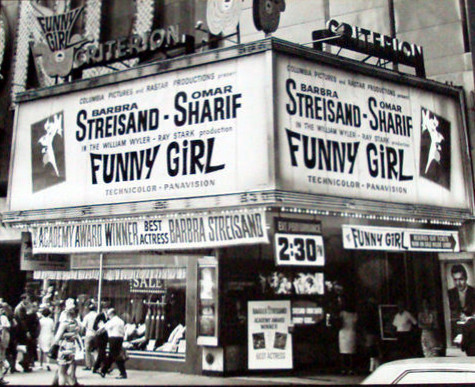 The B.S. Moss' Criterion Theatre opened September 16, 1936 with Kay Francis in “Give Me Your Heart”. Designed in the Art Moderne style with 1,700 seats on part of the site of the old Olympia entertainment complex. This originally included Loew’s New York Theatre and Roof (Cinema Treasures theatre #15178), and the earlier Criterion Theatre (Cinema Treasures theatre #16481) which was built in 1895 as the Lyric Theatre.

Due to divestment of theatres because of antitrust litigation, in 1949, the Criterion Theatre reverted back to B.S. Moss Enterprises. The last film to be shown by Loew’s was Richard Basehart in “He Walked By Night”, which opened on February 5, 1949. During that engagement, Loew’s returned management of the Criterion Theatre to B.S. Moss Enterprises who then operated the theatre until the 1980’s, when it was leased to United Artists Theatre Circuit, operating as the Criterion Center.

With George Montgomery in “Fort Ti”, a Columbia movie that opened on May 29th 1953, the Criterion Theatre claimed to be the first theatre in the world to project a 3-D (with glasses) feature on a giant wide screen, with stereophonic sound and color by Technicolor.

On March 20, 1980, the Criterion Theatre was converted into five screens using some space in the former basement lounge and former lower level retail space. On February 6, 1981 it added a sixth screen. The front of the balcony was extended to the proscenium for a new upstairs auditorium that had 1,041 seats. The new auditorium in the former orchestra seating area had 1,037 seats in 1988. On December 13, 1991, the orchestra level was split by United Artists left/right to create two 400 seat auditoriums. The basement houses seated 156, 198, 193 and 248. Operating as the Criterion Center, day-to-day management was taken over by United Artists Theatres on April 8, 1988, while B.S. Moss Enterprises retained ownership interest.

The Criterion Theatre finally closed on May 4, 2000 and was gutted internally to become a massive Toys R Us store, which itself closed in December 2015. The auditorium now is occupied by a Duane Reade Drug Store, a soon to open (2021) tourist attraction ride, and Starbucks (on the stage).

bigjoe I agree the video and sound of the TMM bluray are very good. Just too bad about the mono incidental music. Maybe Funny Girl will come out in 4k. It would have been nice to have the very lavish Half a Sixpence in bluray but that looks doubtful. Paramount is going to concentrate on streaming so no Paint Your Wagon on bluray either. According to reviews they botched the On a Clear Day bluray.

The premiere was a benefit for The Mayor’s Commission on Youth.

to vindanpar- did you happen to get the 4K Columbia Classics Vol. 2? the reason I ask is simple. during the Overture on the Oliver disc and every so often thru out the film there’s an odd sound as if someone is ever so lightly blowing on a tuba. this odd noise was not on the Twilight Time blu-ray disc of the film.

No. Most of the films in the boxes I don’t want. I’ll get Oliver! when it comes out individually. You’re the first person to mention that noise.

Other than that what do you think of the 4k over the Twilight Time?

to vindanpar- over all the luscious of the colors, the crispness, clarity and sharpness of the picture image is A++. the audio tracks are A++ as well except for that odd noise I mentioned.

also don’t hold your breath about Columbia Home Video issuing Oliver separately. Lawrence of Arabia was in Vol. I issued last Sept. 2020 and it still hasn’t been issued separately.

Do you remember the sound from the original roadshow engagement? Was it spectacular or just good stereo?

the odd sound I hear on the 4K disc of Oliver was not on
the Twilight Time blu-ray disc. it must be a result of the
way they remastered the audio tracks.

It’s been said that the Oliver Reed/Bill Sykes song “My Name” was recorded but cut from the film. A musical portion of it however apparently remains in the Overture.

DZ I never knew that. I thought it was never recorded because they never wanted the character to sing even before the production started.

I like the way we have of discussing films that opened one block over. Mea Culpa.