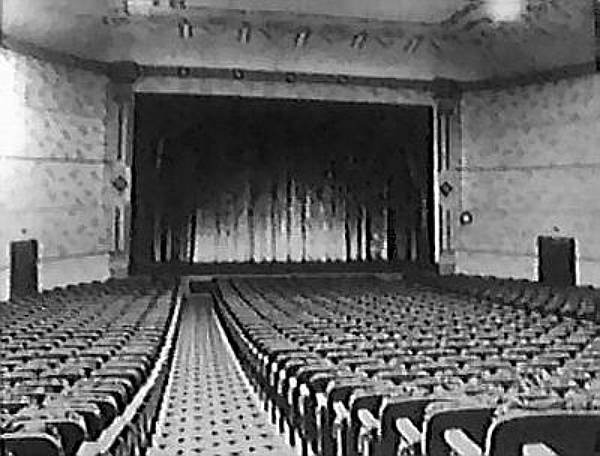 This theater stayed in operation until 1964 when it was sold to Genesee Bank and torn down to make room for the drive-thru offices for the adjacent bank which has since closed.

Today, the site of the theater is the parking lot for the Community Capital Development Corp. which is located in the former bank.

Boxoffice of April 17, 1937, said that Lester Matt’s Della Theatre was scheduled to open on May 1, but the May 8 issue reported that the formal opening had taken place “last Wednesday night,” which would have been May 5.

I managed the Della around 1960. It was a large theater in a small, but elegant neighborhood. A small mall opened across the street and took away the theater parking. It had a large auditorium and a small balcony. It was a Butterfield theater. They owned 8 indoor theaters and later bought up the Drive-In theaters before the chain was bought out and all but the Capitol was torn down.

I had worked at the Capitol, transferred to Battle Creek to the Michigan theater. Then sent back to Flint to manage the Della. I was only 20 years old. We were second run and didn’t have money to run large newspaper ads. I did the best I could using a one column ad in a two column space that made the ads stand out. We did a pretty good business and I enjoyed working there. I didn’t own a car and had problems getting back home after the buses stopped running.

We did good business and they installed a new screen. Unfortunately, an after hours party had a drag queen on stage who accidentally bumped into it and it left a dent in it until the day they closed.

Before I worked at the Della the theater cashier was murdered. A security guard was questioned over and over. He used to take the managers to the bank after closing. I just remember his first name was Bill. It ruined his life, although he continued working security. He later worked for the Capitol theater’s manager, Earl Berry, and walked him or drove him a block to the bank night depository. I felt sorry for Bill. All the publicity made him a nervous wreck. His hands always trembled until the day he died. They never did find the murderer of the cashier. I have a photo of the Della that I will post in a few days.

Given the Della Theatre’s early May, 1937, opening, its size, the fact that it was operated by Matt Theatres, and its neighborhood location, it was probably the yet-unnamed theater project reported in the September 12, 1936, issue of The Film Daily:

“Ground was broken a few days ago for the theater to be built in Chevrolet Park, Flint, for Lester Matt. House will seat 1,200 and cost $80,000. George Bachman of Flint is the architect.”

“George Bachman” was undoubtedly George J. Bachmann, architect of several other theaters in and around Flint.

How well I remember the Della Theater. I lived on Odette St. and attended Cook school. Saturday matinees were always a special delight, with 3 or 4 hours spent in watching my hero, Audie Murphy, and a slew of Western movies

Half-moon doors are cool, but somebody decided to throw a changeup and go octagonal here. (Nods head, thoughtfully and approvingly.)

We used to ride our bikes there every Saturday to watch the Saturday matinees. They had a contest where they randomly selected a ticket stub number for a prize. One week I won this huge bag of popcorn, like about 2 feet in diameter and three feet tall. It was so big I couldn’t carry it on my bike. I had to call my parents to come and pick me up to get it home.