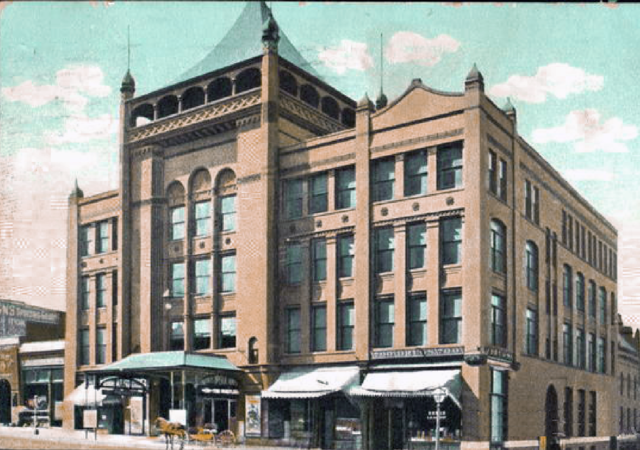 The Grand Opera House, a Romanesque Revival style venue, launched with live entertainment on October 3, 1891. The location was known for two things: 1) live plays and music staged there from 1891 to 1924 and 2) a parking structure from 1927 to 2007. But in 1915, economic realities had set in and the Grand Opera House mixed in motion pictures. And they had a winner with “Birth of a Nation” that October.

The Dubinsky Brothers Circuit operated the theatre in 1920 and still doing a mixture of live stage plays and films but going into rapid descent as the movie palace era was underway. In 1922, Elliott Theatre Enterprise Circuit takes on the Grand Opera House and had plans drawn up by Robert E. Peden & Co. lopping off the tower and converting it to a movie theatre. These plans never came to fruition.

The theatre district was being built elsewhere and the Grand Opera House was dark from 1924 to 1926 when it was finally decided to convert the facility to a parking deck. That operation lasted from 1927 to - technically - 2007 although the public was no longer parking there at the very end. At that time, the decision was made to demolish the building where it is currently a vacant lot.

Sites like https://kchistory.org/islandora/object/kchistory%253A108786 place the theatre depicted here at the NE corner of 9th / Holmes Streets, and say it was later named “Auditorium Theatre”.

https://kchistory.org/week-kansas-city-history/show-must-go says it was demolished in 1945.

This is all very confusing… Maybe we are talking about two theatres, but the image here is misleading?

May 1, 1927: “The Grand Opera House at the southwest corner of Seventh and Walnut streets has been converted into a garage and four storerooms. The theater was built in 1891.”

May 20-21, 1927: “The Auditorium theater, Ninth and Holmes streets, will open as a motion picture house tonight, operated by Samuel Harding, manager of the Liberty theater. (It formerly was the Warder Grand Opera House.)”

The Warder Grand Opera House opened at 9th & Holmes in October 1887, was renamed the Auditorium Theatre by 1895 (possibly earlier) and was destroyed in a December 1897 fire. A replacement Auditorium Theatre opened on the same site in 1899. A 1960 newspaper story has the building catching fire while under demolition in that year, contradicting the kchistory site’s 1945 demolition date.

A page has been created for the former Warder Grand Opera House/Auditorium Theatre.

The Grand Opera House is listed in the 1897-98 edition of the Julius Cahn Theatrical Guide. Managed by Hudson & Judah, it was on the ground floor and had 1,800 seats. Ticket prices 25 cents to $1. It had the “Edison system” of electric illumination. The proscenium opening was 40 feet wide X 39 feet high, and the stage was 34 feet deep. Unfortunately, there are almost no street addresses in this Guide.