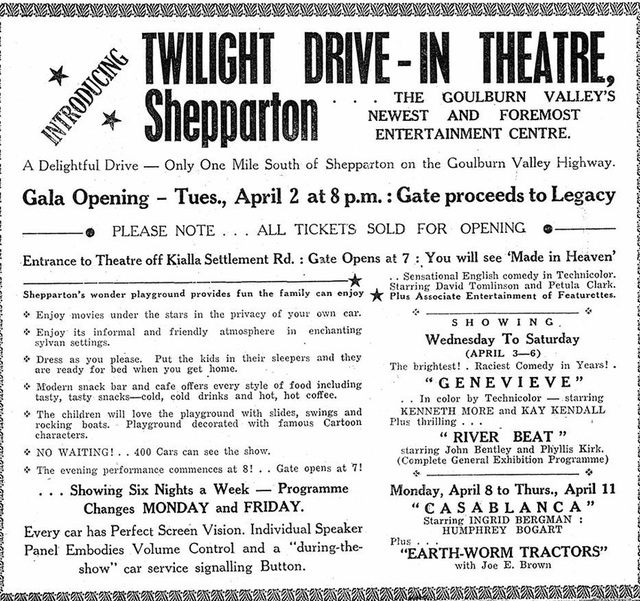 The Twilight Drive-In, Shepparton opened on 2nd April 1957 with a gala charity premiere. Admission was £1.00 per car, with the proceeds of the night going to Legacy. The official opening was performed by the Shire President, Councillor S. Phillips, who congratulated local exhibitor Syd McMillan on his industry in building the drive-in. The opening programme was an English comedy titled “Made in Heaven” starring David Thomlinson & Petula Clark, plus supporting featurettes. The projection team consisted of Perce Woodyard and his assistant operator Fred Sandall. For months the show opened with the National Anthem, accompanied by a 90-second instructional film by Michael Purden on how to find your way around the drive-in. The original design allocated spaces for 400-cars, later increased to 635-cars. The screen size was 80ft x 37ft with a 320ft throw. The projection equipment was RCA with Super Standard projection heads, fitted into RCA sound heads. The installation was carried out by Ron Haymes. The inaugural manager of the Twilight Drive-In was Eddie O'Donnell who had previously been working at the Plaza Theatre, Kyabram.

In March 1988 the drive-in was sold to N. Taig, who then leased on to local legend Hoot Gibson. Hoot ran the theatre until 1991. That same year it was opened by Noel Eva & Reg Leahy who ran it for a further 12 months. This time it remained dark for three years. In February 1995 a community radio station re-opened the drive-in (One FM) and it was staffed by volunteers, with the proceeds going to the up-keep of the radio station. The opening was Terence Stamp in “Priscilla, Queen of the Desert”. The radio station ran the drive-in until June 7, 1998, closing with a double bill “Romeo & Juliet” & “Titanic”. The drive-in was sold again to Peter Copulos, a property developer. Steve O'Donnell ran or leased the drive-in from him. The final closing was on June 12, 2005 with the feature “Robots”. 200 cars tuned up to celebrate the final night. Over the years the drive-in has been used by the Scouts for a Trash and Treasure (Swap Meet). This writer acknowledges the contribution of Michael Purden.

The site of the Twilight Drive-In, Shepparton was sub-divided into four industrial blocks, with a retail shopping village being built on the site. No evidence remains that the drive-in ever existed.

It is now the Riverside Plaza

Has the drive-in been demolished?

Address is 8025 Goulburn Valley Highway, in the Shepparton suburb of Kialla. Postcode is 3631.

Its demolished and is now a shopping centre

The last screening on 12/5/2005 was a free screening of the movie “Robots”. It was the last operating drive-in regional Victoria.