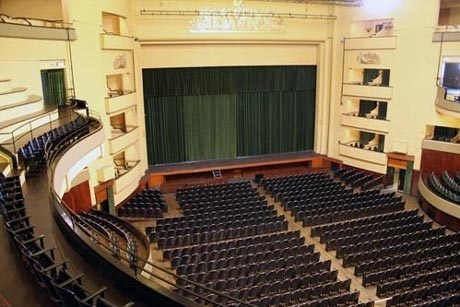 The Coliseu do Porto was opened on 19th December 1941. It is a huge cinema, and its exterior is dominated by a slender tower which is double the height of the facade. Seating is provided for 2,955 in two levels of orchestra stalls, dress circle & boxes, upper circle and gallery levels. Standing room is provided for 500.

In 1995 the Brazilian based Church of the United Kingdom of God (UCKG) wanted to purchase the building, but the locals protested so loudly in a mass demonstration, supported by the Mayor of Porto and other dignitaries that the sale to them was blocked, and it is now operated by a group of citizens as a concert & cultural venue. In 1996 a fire destroyed the stage, backstage areas and a section of the auditorium, but these have been replaced and renovated. Concerts in the main auditorium range from Classical to Pop.

There is a second 300-seat auditorium at the top of the building known as the Atico Room which hosts small, more intimate concerts and performances.