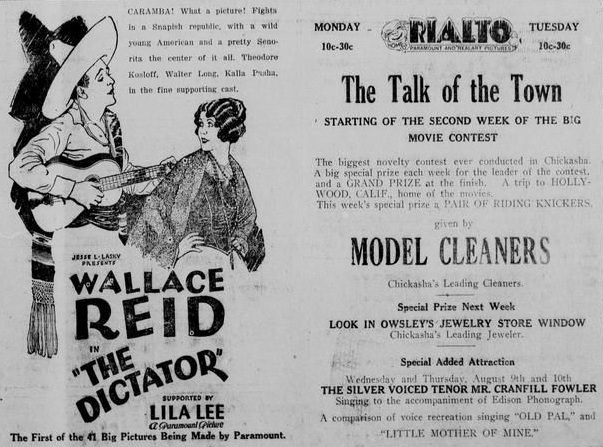 The Rialto Theatre opened September 6, 1920 for J.C. Hartman and Paramount’s theatre operation under Southern Enterprises (and later the Publix circuit) with “Male and Female”. The theatre name was picked in a contest held in the summer of 1920 by lucky winner Geneva Glasscock who won a season pass. The long-running theatre made the conversion to sound. By 1941 it was operated by Griffith-Consolidated Theaters, a subsidiary of Griffith Amusement Co. The Rialto Theatre was closed as a movie theatre in 1956, but was retained open as a special events venue until 1961.

Local architect E. H. (Enos Henry) Eads was interviewed for an article in the April 15, 1920, edition of the Chickasha Daily Express, at the time construction of this theater began. Because it was a conversion of an existing structure, Eads made the far too optimistic estimate of forty days for completion of the project.

The project was apparently scaled down a bit as well, since the newspaper reported that it would have 942 seats, and would include a balcony, and twelve boxes each seating four people. Eads also acted as contractor on the project.

Closed in 1957 as a movie house, but remains as a special events theater until 1961.