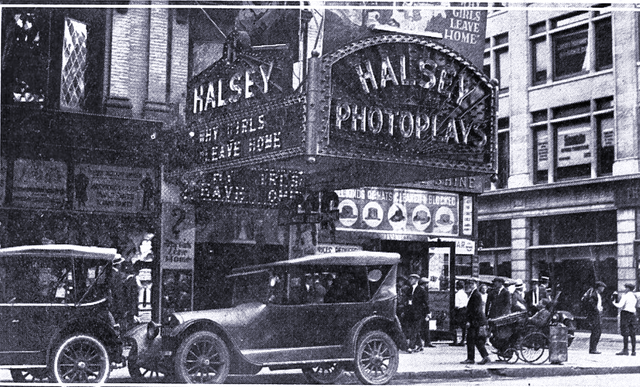 This was one of the legendary Newark showplace addresses at the busy corner of Halsey Street and Market Street. Opened in 1847, this location served 75 years of entertainment including live music, legitimate theatre, vaudeville, and movies. Beginning as Waller’s Opera House, Fred Waldmann took on the location changing it to Waldmann’s Opera House. The location would move to presenting vaudeville.

Under new ownership, William Fox took on the location changing it to a full-time photoplay house in 1917 including the installation of a $15,000 Hope-Jones Unit Orchestra organ. Under Fox, the location became known as Fox’s Carlton Theatre. For a brief period, the theatre became known as the Gayety Theatre.

Ascher Enterprises of New York took over the location rebranding it as Ascher’s Halsey Theatre on May 14, 1921. The veteran location struggled in an era in which movie palaces were being created and was pitched as the only downtown theatre with popular prices. The management said business was poor and advertisements disappear in 1922 likely marking the end of an incredible run.