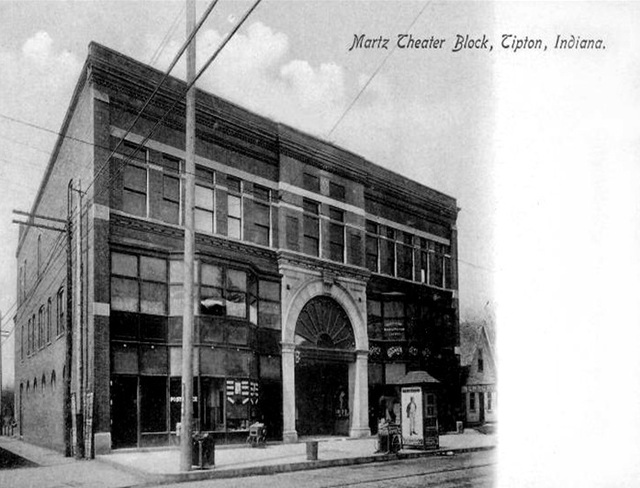 According to the Tipton Daily Tribune, Nicholas Martz opened the 960-seat Martz Opera House December 9, 1904, and before World War I it was known as one of the finest theatres in Indiana. By 1912, it was showing silent movies such as “Birth of a Nation” and “The Three Musketeers” with Douglas Fairbanks, Sr.

The Martz Theatre was destroyed by fire on April 8, 1929 and Mr. Martz bought all new equipment to be used temporarily in the Armory Theatre, which opened on May 11 1929. The equipment was configured so sound equipment could be attached when the Martz Theatre opened again.

The architects for the new theatre, which had been owned by the Masons since 1920, were Richards, Matkins & Utterback. The 670-seat theatre, now renamed the New Ritz Theatre, opened on November 5, 1929, with Al Jolson in “Say It With Songs".

The Ritz Theatre closed October 14, 1956, and its projectors and two flashy signs were bought by Nick Paikos of the Diana Theatre to be used in his theaters in Noblesville.

On March 26, 1957, the Tipton Daily Tribune reported that the dismantling of the marquee marked the end of an era. In July 1958, the building was turned over to the Tipton Youth Foundation.

Needs to be listed as demolished. The current structure is a chintzy cinderblock thing from maybe the ‘80s at oldest. The 1915 Sanborn shows a capacity of 960. The auditorium was pretty large, and the balcony was very deep, the opening forming almost a perfect circle.

For the temporary location, the 1930 maps are not digitized, and there does not seem to be an armory currently. I did find a newspaper article saying a new armory was constructed in 1928. It seems to have been replaced in the ‘50s.