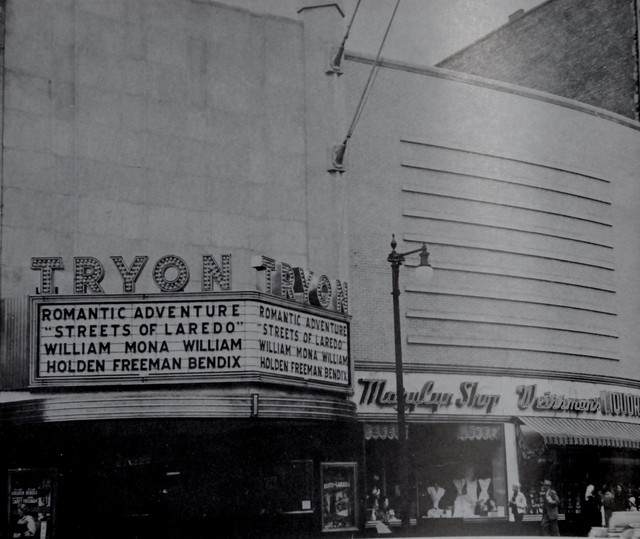 The Tryon Theatre was opened on April 18, 1949. Indiana limestone and face brick have been neatly blended to form a modern front, distinguished by a triangular flag tower. The circular bronze marquee and arcade ceiling are of non-glaring illuminated egg crate. Display frames are recessed in Verde antique green marble.

A yellow verona and rubber tile floor, Craig pink walls and recessed pin lights are found in the lobby. The lighted candy counter stand is of picked oak. From the promemade, a circular staircase in a rotunda leads to the restrooms, manager’s office. Bronze railings lead to the interior “stadium”. Finishes consist of painted cement floor and wainscot. Walls and ceiling are of colored ascoustical plaster with white coved and recessed lights.

The architects were Wechsler and Schimmenti. It was built on a 68' x 160' lot which they also had room for two stores, just the the right of the marquee.

Photo of the Tryon!

Does anyone know the address of this bldg?

Tryon Theatre was located at 72 E Main St. according to the 1959 Manning’s Amsterdam Directory.

I believe all of the buildings pictured were torn down to make way new lanes on route 5.