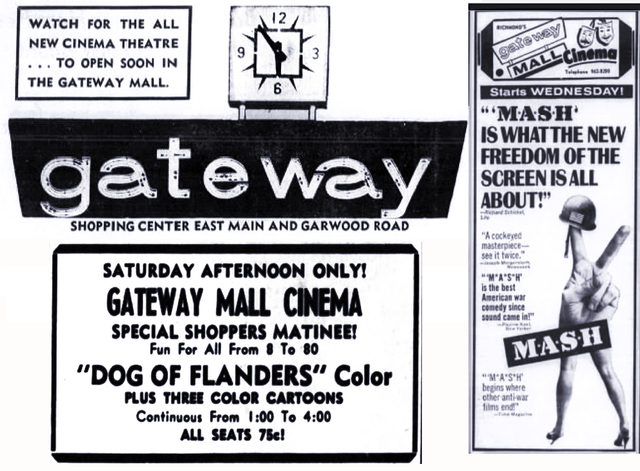 Located within the Gateway Plaza strip mall. The Gateway Mall Cinema opened as a single screen on April 29, 1970 with “MAS*H”. Later a second screen was added. It was closed November 14, 1996.

The Gateway Mall Cinema opened April 29, 1970 with the film, “MAS*H” and was big news because the previous grand opening for a theatre in Richmond was nearly thirty years earlier when the State Theatre launched on May 10, 1941. The architect of the 210-seat theatre was Mel Glatz of Denver. Part of the Danbarry Cinema Circtuit, it was acquired by Kerasotes Circuit in 1996 which decided to shutter the Mall Cinema November 14, 1996.

@dallasmovietheaters – are you sure about the Danbarry/Kerasotes dates? I graduated high school in Richmond in 1986 and I could have sworn it was Kerasotes back then.