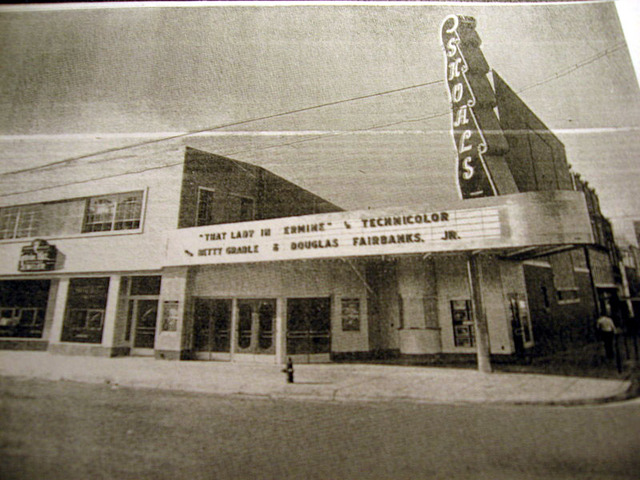 The Shoals Theatre opened on Thursday, October 21, 1948. The theatre was located at 123 North Seminary in Florence, at the corner of Seminary Street and Mobile Street, diagonally across from the post office. The theatre was in a new building also containing four stores. One store, Brother and Sister Shop, was already open and in operation, but the other three stores opened at the same time as the theatre.

The theatre had 1,344 seats in orchestra and balcony levels. At the time of its opening, it was the fourth largest theatre in the state, and the largest in any town with under 100,000 population. The theatre featured voice of the theatre sound equipment, and had a complete duplicating set that could be activated by a snap of a switch in case of failure.

The theatre was the first in the South to feature Slide-back seats, which could be retracted six inches with the shove of the body, to make it easier for people to walk in front of the other customers. At the time there were only four other theatres in the world in posession of these seats.

This theatre’s last night of operation was Thursday, March 13, 1980. It was reopened for concerts, special events and used in a film festival in 2011. By 2012, it was in use as a live theatre. Due to a fire in the basement in early-2016 the theatre was closed for renovations to be carried out. It had reopened by summer of 2017.

We’re getting locked out of the larger views due to password issues.

The Shoals Theatre was designed by the Nashville architectural firm Marr & Holman, according to an item in Boxoffice Magazine, April 10, 1948.

The January 8, 1949, issue of Boxoffice gives the seating capacity of the Shoals Theatre as 1,166, with 974 Ideal Slide-Back chairs on the main floor and 192 in the balcony. The standee area would accommodate about 150 additional patrons, the article said.

In the late 60s early 70s, the movies changed twice a week. The theatre was the only theatre within walking distance from the University of North Alabama after the Norwood closed permanently due to a major fire. Admission was $1 for college students

The theater has been under restoration and is open once again for community events and concerts. Since it reopened, several movies have been shown there during the annual George Lindsey Film Festival.

The Shoals theatre is currently the home of the Shoals Community Theatre Group which is a reperatory company putting on regular productions on a nearl;y monthly schedule. They have a full schedule through the spring so it looks like the building is doing well. Their next phase of renovation will involve renovating the blacony and putting tables up there. Their official website is: http://www.shoalstheatre.com/

When I was in College there, we saw movies there pretty-regularly. The Norwood (now closed) permitted smoking.

retroali is correct. The Shoals is open again with a variety of live performances. Website update.

The theatre is fully operational as a non profit venue with an alcohol license. It can be rented out for events. There are plans to upadate the sound and lighting as well as reinstall a projector so that films can be screened again. You can like the Theatre on facebook under Shoals Community Theatre or follow the theatre on Instagram under @shoalscommunitytheatre