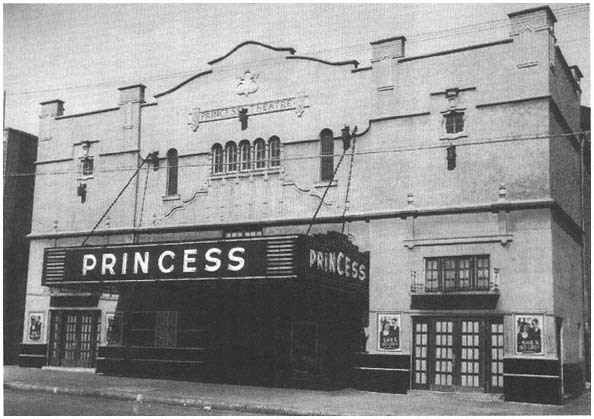 The Princess Theatre in Florence opened on Labor Day, Monday, September 1, 1919, with a cost of $75,000 and a seating capacity of 1200. The ads referred to the theatre as the “$75,000 Opera House”. The theatre was fashioned in a Spanish motif, had a chadelier, and a cork linoleum floor.

On Monday April 13, 1925, the theatre was reopened after a remodeling and replacement of the roof. 500 balloons were thrown from the top of the theatre, each containing a pass. Professor George E. Hatch played the Wurlitzer organ for the opening that day. By 1941 it was operated by Muscle Shoals Theatres, a subsidiary of the Nashville, TN. based Crescent Amusement Co.

The Cinema Theatre’s last night of operation was September 24, 1966.

There is a newer carpet store on the corner of Seminary and E. Tennessee, and next to that, where 215 E. Tennessee would be, a small building that bears no relation to the exterior view posted on 6/17/07. It looks like the theater was razed and a church built on part of the property.

Definitely needs to be listed as demolished. Looks like the church put up that ugly addition sometime right after the theater closed, judging by the architecture.