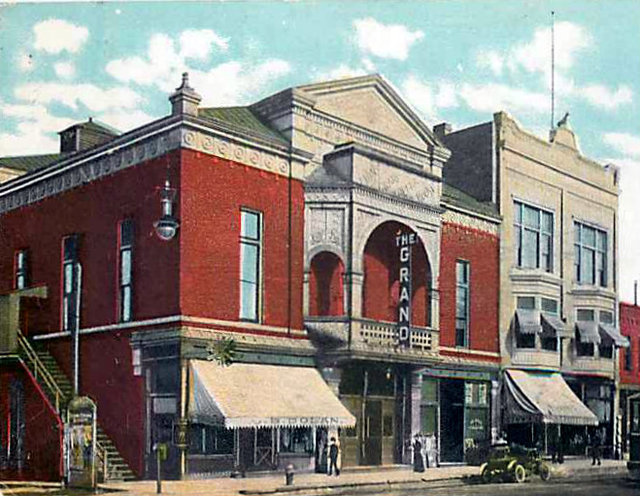 The Strand Theatre opened in 1915, a conversion of the former Grand Opera House, a turn-of-the-20th century building. The Strand was destroyed in a 1929 fire, just a year after another fire burned Aurora’s then-largest movie house, the Rialto, to the ground.

Colonel Henry H. Evans and other local investors entered into a â€œcombineâ€ and built the Evanâ€™s Grand Opera House (later called the Aurora Opera House or just the Aurora). Opening night was November 6, 1891.

In 1915, the Grand Opera House was sold to Jules J. Rubens and Associates. In December 1915, the building re-opened with a pipe organ as the Strand Theater. The Strand burned to the ground in the fall of 1929.

The building was located on the corner of Broadway and Benton.

The Aurora Opera House is listed under Aurora IL in the 1897-98 edition of the Julius Cahn Official Theatrical Guide. J.H. Plain was Mgr. Seating capacity listed as 1,202. Tickets ranged from 25 cents to $1. It was on the ground floor and had both gas and electric illumination. The proscenium opening was 32 feet wide X 39 feet high, and the stage was 43 feet deep. There were 7 members of the house orchestra. There were 4 daily newspapers. Hotels for show folk were the Bishop, Evans, O'Neill, Northwestern and City. The 1897 population was 25,000.