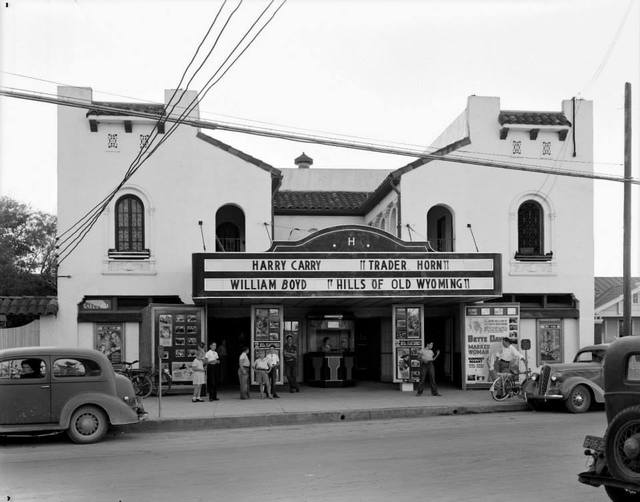 The Victor’s Theatre sat on the south side of San Antonio, near the intersection of E. Southcross Boulevard and S. Flores Street. It was opened February 2, 1928 with Mary Astor in “Rose of the Golden West”. It was designed by architect Gilbert Santacruz. By 1929 it had been renamed Harlandale Theatre. In 1932 it was remodelled to the plans of architect W. Scott Dunne.

It had served as office space for its later years, and was vacant for quite sometime. The theatre has since been demolished.

Please email a photo of the Hi-Ho Theater to me.

Second request for a photocopy of the Hi – Ho-Theater.

I own a souvenir program from the formal opening of the Victor’s Harlandale Theatre as it was called on February 2, 1928. It is a wonderful history of this theater and it boasted of a new Reuter organ, has a picture of the foyer (or lobby as we called it) and lists all the amenities such as indirect lighting, perfect view. smoke room, Gardiner Velvet Gold Fibre Screen, the latest in projection (Simplex) and spring time air the year ‘round. It lists all the board of directors, the builder was Mr. John T. Wilson, Jr., Gilbert Santacruz was the architect and Julio Vasquez was the decorator. It is approximately 40 pages and has numerous ads from local business including Thurman Barrett. Walter Napier was director and counselor of Victor Theatres, Inc. I spent many happy hours as a child in the 1950’s watching movies here and never knew how grand it was originally until I acquired this program.

I was born and raised in the Harlandale community and, after many years, have come back. My parents moved into the neighborhood (on Cliff Avenue) in the early 1960s and I have memories of going to see movies at some of theatres mentioned above (the Texas Theatre on Saturday mornings). But I never knew that there had been a theatre in the community—literally blocks from where I grew up. If copanogirl checks this site at any point, I would very much like to learn more about Victor’s Harlandale Theatre. What a remarkable piece of memorabilia you have. Let me know!

I will be happy to send you pictures out of the program. I too feel a deep sense of belonging to the Harlandale community having gone to Morrill Elementary, Harlandale Junior High and Harlandale High School. It’s like walking the old streets again in an age when you felt safe in this little area. I feel very fortunate to own this program as I too never knew how grand this theatre really was. You may email me at and give me your email and I will try to copy some of the program and email them back to you. I tried to put them on this site but did not succeed.

I have now completed a CD of the whole souvenir program of the formal opening of the theater in 1928. If anyone is interested please contact me @
T. Loftin

Just added a 1937 photo of the Harlandale Theater.

Address was 5629 S. Flores. A Google search of Harlandale Theater San Antonio will bring up a great 2012 UTSA link called The Top Shelf by Tom Shelton with the original photo I just posted, as well as other theaters of the era.