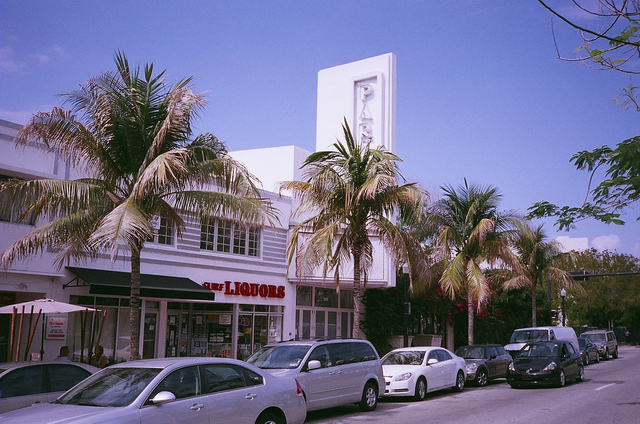 The Variety Theater was designed by Miami Beach architect Henry Hohauser and opened as a revival house on June 20, 1946 with Cary Grant in “Suspicion” & Joan Fontaine in “Bedtime Story”. It was run by a small Florida chain named Claughton Theaters. I believe they had about a half dozen theatres in the greater Miami area. It was located in the South Beach district of Miami Beach (Washington Avenue and 5th Street). I remember the theatre in the 1950’s. They booked mostly RKO and Republic films.

I was only in that house once as a child, so I don’t remember much about it other than it having a big lobby area and a clock (oddly enough) to the right of the screen which I found to be annoying. Eventually Claughton Theaters dropped this theatre as well as the rest of their chain of theatres.

Here is an article about what is going on currently in, and what is being planned for, the former Paris Theater: http://www.miamiherald.com/488/story/1393080.html

According to this web page, architect Henry Hohauser was a cousin of architect William Hohauser and had worked in his New York office before moving to Miami in 1932.

I just checked it, both by clicking on it and pasting it in two different browsers and it worked without a “membership required” screen coming up in either.

I think the Miami Herald is having site problems because I now get an error handling message which is not what you or AlAlvarez were getting. Their home page isn’t working either. Perhaps the link will work later.

I think they have things fixed; try the link again, If not go to
http://www.miamiherald.com and put ‘Paris Theater’ in the search box; then scroll down on the response to the Recent News box on the left – the article begins “Historic theater could get second…”

Claughton Theaters also owned the Embassy and Royal Theaters on SE 1st Stret in downtown Miami. They were closed, sold and torn down around 1959 for new construction.

In the late 1940’s, Claughton inked a deal with the late Ed Taigman (a former mayor of North Miami) to build a theater behind his wraparound retail property on NE 125th Street and NE 6th Avenue in North Maimi… however, that deal never gelled. A Walgreen Drug Store sits on that corner now.

A recent photo of the Paris Theater.
View link

This reopened on October 13th, 1961 as “The New Paris” with an adult triple bill program. Grand opening ad posted.

This article from the August 17th, 2020 Miami Herald says the Paris Theater will next become a restaurant:

Here’s a remiamibeach.com article including some discussion of the theater’s remaining historic elements and renderings of the new concept:

This website promoting the current incarnation of the venue says “In the ’90s, when Miami’s fashion and film industries were riding high, artists such as Madonna, U2, J. Lo, Christina Aguilera and Ricky Martin shot album covers and music videos there. Major photographers such as Helmut Newton, Herb Ritz, Patrick Demarchelier, and Bruce Weber shot campaigns for major fashion magazines and world renowned fashion designers using supermodels of the era to create their content.”