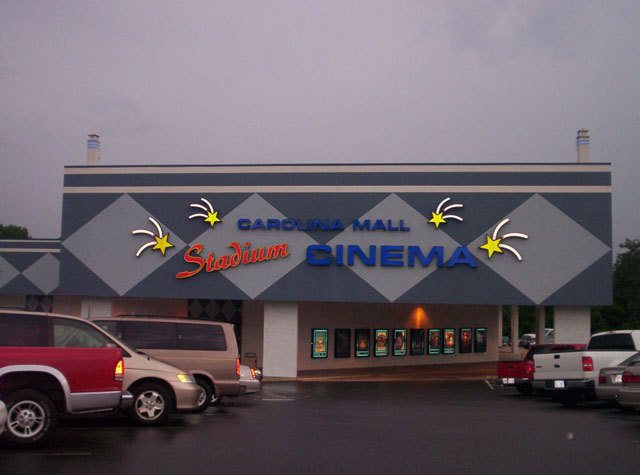 Originally opened as the Carolina Mall Cinema III on December 22, 1976. A fourth screen was added in 1978 and it became a six screen theatre in 1982. It became the Carolina Mall Cinemas 8 in late-1985. She previously was located in the adjacent mall were a JC Penney’s now stands. Like many of her sister theatres CMS was one of several cookie cutter floor plans that LR design and built. In mid-1987 the cinemas was completed as boast the largest screen count around: eight screens. The Cinemas also hosted the first video store in Concord. This was eventually taken over and closed by Blockbuster Video. To this day you can see the holes in the interior panelling where the word “VIDEO” was installed.

Her exterior and interior have a wooden alpine trim that gives the building a very solid look. The lobby is extremely inviting, very open and to this day contains the same carpet that was installed almost 20 years ago. The wallpaper scheme is the creation of two managers. The original manager wanted a sandy flower print yet whenever his daughter took over for a year she installed random panels of dark khaki to break up the look of the walls.

Around 1990 or 1991 LR sold off its NC and SC theatres to various chains. United Artists purchased a good percentage of these theatres in Cary, Concord, Wilmington, Albemarle, Asheville, Raleigh and Gastonia. (I may be forgetting a few) As the years went by and the local area grew attendance decreased slightly and the theatre began to show some wear. Around 1995 or 1996 Merill Lynch purchased a large amount of the UA stock and began “innovative plans” to turn a profit with their theatres. The theatre were hastily neglected and profits began to decline. As a forshadowing of things to come Some of the NC theatres were closed due to low income and over all poor conditions. Yet the CMS 8 remained strong. In fact she received a new marquee in 1998 whenever the local mall remodeled.

By 1999 the CMS was now part of a flooded Charlotte theatre market with boast competition from Eastern Federal, AMC Theatres, Cinemark, Regal Cinemas and Consolidate Theatres. Later on that year United Artists Theatres went into brankruptcy protection and began to shut down more of the unprofitable theatres. For the next two years there was a constant threat of the end being nigh, both for the Carolina Mall 8 and for United Artists Theatres.

In late-2001 all UA theatres began to receive a memo concerning a merger and debt buy-out of Regal Cinemas, UA and Edwards. In the Spring of 2002 is was made offical. For the next year the new company would test run the theatres to see which should remain and which needed to be shut down. Each time she made the cut. Now in 2004 after proving her vitality she boast an all digital sound system, new projectors, digital projectors in each theatre, plasma screens in the lobby a freshly painted front and new poster frames, yet the service and hospitality remain the same. Two extra screens were added in 2012, and the theatre is now operated by Southeast Cinemas.

UPDATE: As of this morning (5/26/2005) the Carolina Malls Cinemas 8 is closing while the she transitions ownership to become part of the Southeast Cinemas theatre chain. This company recently acquired the REG Eastgate Cinemas 5 just up the insterstate in Albemarle,NC.

The new owners have a $1,000,000/ 2 month long renovation plan in the works. Their first goal will completed this Friday (5/27/2005) by drastically discounting the prices to $5.00 for adults and $3 for matinees, children and seniors. From there on they will proceed to gut out the and rebuild the lobby along with converting the theatres into stadium seating.

What an excellent thing to happen to such a great place. :) Of course… I am biased… ;)

how is this theater??? ANY NEW INFO?

The Carolina Mall cinemas opened as 4 screen theatre, owned and operated by Litchfield Theatres out of Easley, SC. I was the GM there from 1981 until 1991. In 1984 it was relocated to it’s present location and expanded to 8 screens with a video store in the lobby. When UA took over in 1986 the video store was closed and was not taken over by Blockbuster Video, UA just did not want the video store in the theatre. I recently returned to the theatre to help with the installation of digital projection. It was neat to return and take out the 35mm equipment I had help install in 1984.

Have been coming to this theater since the 8 ‘ and will never come back because of the new no concealed carry sign they have put up in the last month. I will not spend money in places that make there customers sitting ducks. Plus they are running Al Jazzera commercials. They have no shame.

This theatre opened WAY BEFORE 1982.

This theatre opened as a three screener under Litchfield Theatres on December 22,1976. It expanded to four screens by 1978 and by 1982 expanded to six screens and later by the mid-1980’s by eight screens. I have the original ads for the Carolina Mall Cinemas grand opening. E-Mail:

Opened as the CAROLINA MALL CINEMA III on December 22,1976 under Fairlane-Litchfield Theatres.