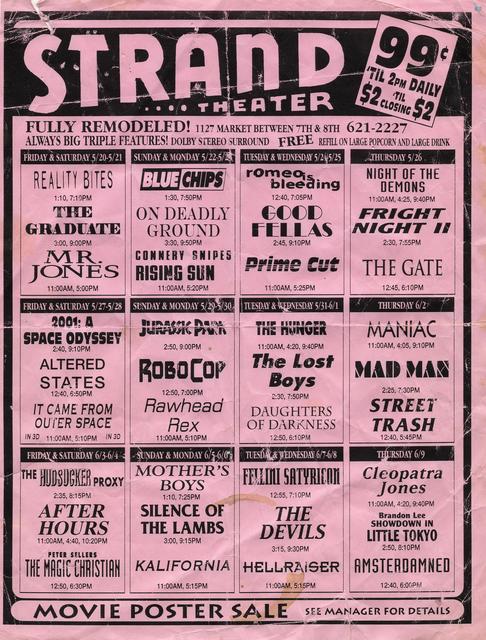 This theatre opened on October 27, 1917 as part of the Grauman chain. It had 725 seats. It changed hands shortly thereafter and would change hands again in 1925 and 1939.

The West Side Theatre Company operated the Strand Theatre from 1940-1977. With the advent of television in the 1950’s and Market Street starting to decline in the 1960’s, the attendance at the theatre dropped (along with a change in the audience). Programming was triple bills, changed daily, with nightly bingo games.

Mike Thomas and a partner bought the Strand Theatre in 1977. (Thomas would also acquire and operate several other Market Street theatres around this time: the Warfield Theatre, the Crest Theatre, and the Embassy Theatre. He would later start up the independent film distributor Strand Releasing.) Thomas redid the theatre and hired security to help clear out undesirables. In June 1977, Thomas reopened the Strand Theatre with a revival of the Howard Hughes production of “The Outlaw” (which premiered originally down the street in 1943 at the United Artists Theatre aka Market Street Cinema). The show sold out and the Strand Theatre would become a well-known venue for revival cinema. The Strand Theatre also became a popular venue for midnight showings of “The Rocky Horror Picture Show”.

The mid-1980’s took a toll on the Strand Theatre. Home video took a bite into the revival theatre business. Market Street would decline further. Then the October 1989 Loma Prieta earthquake would cause the Strand Theatre to close temporarily. (Its neighbor, the Embassy Theatre, wasn’t so lucky, as it was too badly damaged to reopen.) When the Strand Theatre reopened, it was sold to Silver Screen Amusements. (Thomas would still book the theatre.)

From the mid 1940s a photo of the Strand and Embassy theatres in San Francisco.

The familiar neon STRAND letters from the marquee are being refurbished at an offsite location, but will be back for an encore at the theatre.

According to “The Encyclopedia of the American Theatre Organ” by David L. Junchen, pg. 628, there was a two manual, seven-rank Smith theatre pipe organ installed at the Strand Theatre in San Francisco at some point. No date or further details are given.

Where is this organ (or its parts) today?

I do hope this theatre’s renovation turns out for the best, thanks!

Until the present renovation, the chamber for the Strand’s organ was still in existence onstage. It was obviously a later addition. It stood Stage Right, and was accessed by a conventional door. The openings where the swell shades had been were still there, though blocked by tongue-in-groove planks. The chamber was used to house Mike Thomas’s film collection, during his tenure as the Strand’s operator.

Renovation of the Strand proceeds apace. It is still at the heavy construction stage, but is starting to move toward the more white-glove aspects of the process. The large theatre has had its new concrete risers for seating, as well as the balcony, framed and poured. It is now possible to get a good idea of how the space will appear. Restoration work on the original auditorium ceiling and sidewalls has not begun yet, but they are still there, with their simple cornice moldings and ornamented ventilation grilles preserved. Lest anyone be disappointed that there is no historic proscenium visible in the reconfigured house, be assured that there was nothing back of the later screen left to restore. The plaster of the proscenium all fell off the concrete in the Loma Prieta Quake, and had simply been covered by a quick troweling of plain plaster. The new proscenium is quite a few feet forward of the old, though structurally, the old one still exists in concrete form. Speaking now of the forward portion of the building, the views out the upper story windows of the Market Street scene are going to be wonderful. Originally this vantage point was available only to the people who lived and worked in the Strand, now many people will get to enjoy the view.

SF Chronicle architectural writer John King’s story (with photos) on the reopened Strand Theater. Scroll to the bottom for a 1950 photo of the marquee.

I am saddened that no one has mentioned that the manager ( and I presumed owner ) of the Strand in the 1960’s and 1970’s was murdered in the theatre by a crazy person. I spent a lot of time seeing movies there, at the Embassy next store and at theatres down the street as a teenager and adult from 1964-1980 when I moved to Sacramento.