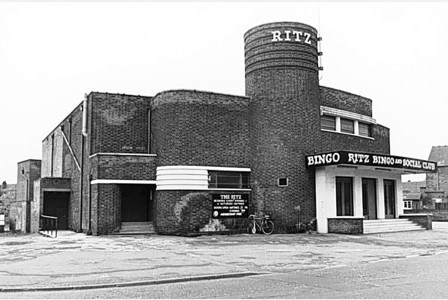 Located in the eastern part of the Carlton district of Nottingham. The Ritz Cinema was opened Monday 1st June 1936 with Eleanor Powell in “Broadway Melody of 1936”. It was also known as the Ritz Carlton Cinema to avoid confusion with the large city centre Ritz Cinema (later Odeon). It had 914 seats on a stadium plan with a raised stepped section at the rear which was named a balconette. It was equipped with a Western Electric(WE) sound system. Continuous performances; Evenings from 5.45, Matinee Thurs. Two changes weekly. Prices 8d. to 1s/2d. There was a large car park. The Ritz Cinema closed Saturday 8th June 1968 with Barry Ingham in “A Challenge for Robin Hood”. It was converted into a bingo club which closed in 1990.

In 1992 the building was ‘For Sale’. Since demolished, Willow Brook Care Home has been built on the site.