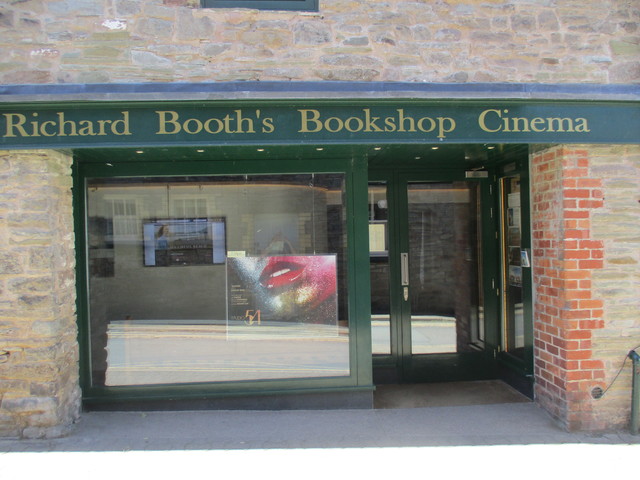 Located in Hay-on-Wye, Brecknockshire, Wales on the border with Herefordshire, England. Born in Hay-on-Wye, in September 1938, Richard Booth wondered how he could stop young men like himself leaving for the ‘big city’. Using an inheritance, he set up a second-hand bookshop in the old fire station, and brought containers full of books from the USA. Soon other similar shops opened, and eventually Hay achieved its status as the ‘Town of Books’. Booth became known as the ‘King of Hay’, and was awarded an MBE in 2004 for services to tourism.

In 2011, US businesswoman Elizabeth Haycox and husband Paul Greatbatch acquired Richard Booth’s bookshop. Still called “Richard Booth”, it has been extensively refurbished, and now has a café - and a cinema, opened in May 2012 in an area previously used for storage.

The small auditorium is extremely comfortable, and includes two boxes, each with two seats, high up either side of the projection box. There is a pleasant bar/lounge.

Visitors should be aware that the whole building is ‘L’ shaped, meaning that, while the bookshop and café are at 44 Lion Street, the cinema is around the corner on Brook Street.

What kind of films are shown here? Any information on past programs, hours and days of operation?

Yes I’m curious too. Maybe they focus on films that were adapted from books. : )

A few years ago I read a book about Hay-on-Wye: “Sixpence House: Lost in a Town of Books”

Google Maps shows Hay-on-Wye is in Wales, not England.

Also there’s a CT page for the New Plaza Cinema in Wales in Hay-on-Wye.