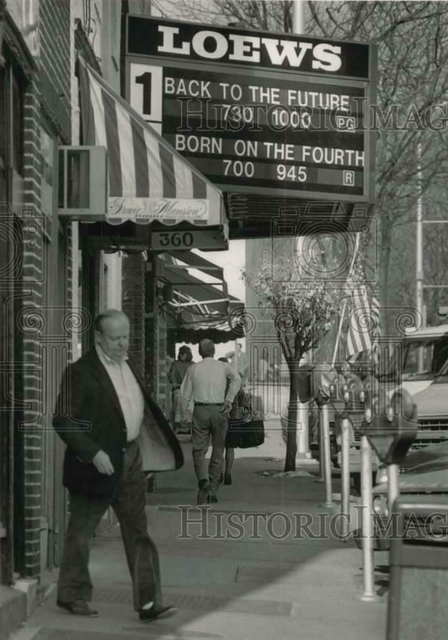 Opened as the Greenwich Playhouse in 1914. This classic neighborhood cinema, like many others in the tri-state area, was last owned by the Clearview Cinemas chain. The Greenwich Twin Cinemas are right in the heart of dowtown Greenwich.

This theatre has 440 seats total. I don’t know the exact numbers in each, but the second theatre is small and is in the balcony. When you enter, there’s a chandelier, the box office and concessions on the left and a staircase just up ahead on the right. The main theatre is on the left. The building is shaped like an “L”. If you go outside and make a right, just up ahead on the right is the end of the auditorium, at the sidewalk, right in a neighborhood. It’s quite tall, maybe 40 feet and it’s completely covered in ivy.

The theater actually opened long, long before 1963. As far as I know, it opened in 1914 as the Greenwich Playhouse. The stage is still fully rigged, and there are several dressing rooms in the basement. I used to be the Division Mgr. for this theater during my tenure at Clearview.
It was announced last year that the theater would be closing. The building was sold for a huge amount of money given its location on prestigious Greenwich Ave. The current thinking is to gut the building for retail space. To my knowledge, Clearview is operating on a month-to-month, and the new landlord has to give them 120 days to vacate with notice. To date, they haven’t received such a notice. The downstairs seats approximately 320, and the former balcony upstairs seats approximately 120. The chandelier in the lobby is a Clearview addition. The ceiling height in the lobby was lowered at one point, and upstairs in an office suite (that formerly served as Loews Division Office when they had the place) there is a storeroom that features what used-to-be the original lobby ceiling.

I thought it was built before 1963, but the directories in print from 1946-1962 had no theaters listed – not even a theaters header category! I even cross-checked “Cinemas” and “Movies”.

Btw, I stopped by Criterion a while back to see if you were working to say hi. You weren’t there and I left you a note.

Theater is currently “Closed for Renovations”, to correct some water damage from the last heavy rain storm.

There’s an article about this theatre in – View link

“In April 1915, the film "Cinderella” screened in Greenwich Theatre. It starred Mary Pickford and was filmed at the estate of Commodore Benedict in Greenwich…Greenwich Theatre’s initial run as a vaudeville and performing arts stage lasted only from 1914 to 1930, before being reopened as a cinema."

The theater building is in the process of being converted into an Apple store.

I visited the Apple Store now open in the former theater building. They’ve completely gutted it—the balcony, proscenium, and stage are gone. There is nothing left to suggest it ever was a theater.

I was the manager for CinemaNation from September 1982 to around 1985. This was originally a vaudeville theatre. Supposedly W.C. Field’s and Fanny Brice played here. Behind the screen was the fire curtain, and a large stage and flies. Halfway up the stage left wall was a still sand filled fire box with an empty pack of Lucky’s, which I left there in the hope someone else would find and enjoy how the Lucky’s invoked the 1930s â€" 1940s. The upper fly gallery was empty, but cross the stage you could see a storage area with hugh rolled up…curtains, set backgrounds, I don’t know. One of my ushers as brave/stupid enough to cross the narrow walkway that reached across the top of the stage. It was the only way to the other fly gallery, no ladders on the other side, and the length of the walkway had no rail or handholds. The rolls were too dirty and heavy for him to unroll them in the packed fly.
Downstairs below the stage were the shells of dressing rooms. Carbon arc projectors until we got the platter system around 1984. Also new seats, and the enclosed the balcony as a separate arts theatre, even though I once showed the Rick Springfield vehicle “Hard to Hold” (I called it hard to bear" up their. I think the arts company was Universal Classics, and if I am correct that the first arts film upstairs was “The Return of Martin Guerre,” then the balcony arts film theatre opened August 28,1983. Later, October 2,1983, I had the pleasure to show the re-issue of “Rear Window” after nearly 40 years. I had to wear my (uck) CinemaNational polyester coat, but I wore a next tux shirt and bow tie underneath. This was as close to hosting an Alfred Hitchcock opening as I would ever get! I also showed the re-issue of “Rope,” maybe “The Trouble with Harry”. Also “This is Spinal Tap. Downstairs in the main theatre I showed "Monty Python’s The Meaning of Life” “My Dinner with Andre” (which arrived with unnumbered reels, we had to piece the order together by noting which dishes were served in which order), and among many others, the worst main stream movie ever made, “Six Weeks”. At one point my district manager, John Hynes, told me that of all the chain, it was my screen they were going to silverize so I could show 3-D films. It was an honor it was fantastic it was…So I got to show “Jaws 3-D,” “Space Hunter in the Forbidden Zone” and “Metalstorm: The Destruction of Jared-Syn”. All the mid-80s 3-D films were cheap exploitation, no wonder it quickly died out for another 20 years.