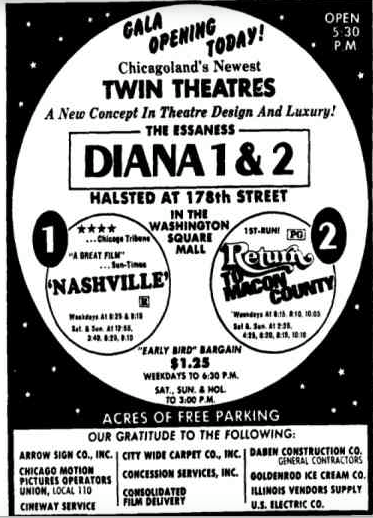 The Diana Twin opened in September 18, 1975. The original operating chain was Essaness, later operated by Plitt Theatres and finally by the Cineplex Odeon chain. It was located in the Washington Square Mall. The Diana Twin was a nice change of pace from the drab General Cinemas in Indiana. It was located just over the state line in Homewood, Illinois. I saw several films there that I couldn’t see anywhere else such as “Ragtime” and “Friday the 13th 3-D”.

My best memory was a weeknight sneak preview that ended up being the first public showing of “Pee Wee’s Big Adventure”. Imagine a packed house of people all doing the Pee Wee laugh before the show.

As the area became more dangerous and the mall less populated, the Diana Cinemas became a dollar house in 1992. Apparently this experiment failed and the theater closed in 1994. A few years later I went to take a peek and it appeared everything was still there, though I couldn’t see into the auditoriums.

Both the Diana Cinemas and mall that it was located in have been demolished in around 2007, replaced by several “big box” type retail structures.

Didn’t Paul Anka do a song about this theatre? Just joking and Paul Anka was a little bit before my time.

I had lost track of the situation at Washington Square Mall after I left the area. Sad to hear it went into such a precipitous decline and finally was torn down. I was the Assistant Manager and then Acting Manager from early in 1978 to late 1980. At the time Essaness Theatres was the second largest chain in the Chicago area. It was a great first job after working on my AA in business. In 1978 they had just divided the Twin into one of the first mulitplex theaters — after the remodel boasting four screens. The Essaness folks usually did the details well,and yes, the Diana was red plush everything.

Best memory I have of seeing a movie at Diana Cinemas at Washington Square Mall is with my mom, dad, and sister when we saw “A Christmas Story.” We came out of the theatre that night and how fitting…it was snowing. Thinking it was before Christmas of 1983.

Essaness managers said that the Diana was named after Alan Silverman’s wife. She was also allegedly responsible for the restroom tile choices in many of the Essaness locations.

I remember seeing a bunch of movies there for free
my grandfather Ben Sax worked there. Nothing like
walking to the front of the line. He was a good man
and always a fun time at the Diana!!!!

After my family and I moved to Glenwood, Illinois in June 1978, I discovered this theater was down the street from where we lived and I saw many movies there (the Diana was a block north of the second-run Glenwood Theater, also within walking distance).

I remember the Diana ran many Columbia Pictures films. Among the ones I remember seeing there were: !978 “The Cheap Detective”

1980 “Kramer vs. Kramer” “The Blue Lagoon” (The very first R-rated movie I ever saw) “Close Encounters” (The Special Edition)

I’m sorry to hear the Diana, as well as Washington Square Mall, is now demolished (I haven’t been back to Illinois since we left in 1983, and I don’t think I’ll be returning anytime soon). Shame.

I remember going there a few times, and remember seeing Seems Like Old Times at a birthday party there. Years later I saw Coming To America and I believe it was second rate then. I also went to its sister theater Brementowne in Tinley Park which was around long after Diana (and Washington Mall).

Thanks for refreshing my memory, Dawn.

I also saw “Seems Like Old Times” (yet another Columbia film) at the Diana in January 1981 (the first movie I saw that year).

Washington Square Mall (which was across the street from a historic racetrack) was plagued by anchor closings as I remember it. Service Merchandise was close to the Diana, so when that closed it affected foot traffic in the area. When foot traffic was diminished sales did too, so the owner seemed not to re-invest in the property which as I remember it was heavily made of cinder blocks and which made the demolition process quite a challenge. I do not remember experiencing any hassles whatsoever at this Mall, but it seemed to serve as an al fresco place to hang out for many people as I believe it was a bus stop on our Chicago area PACE Bus line. Saw many a Columbia Pictures film at the red-red-red Diana Theatre. Great place to see a motion picture. Saw just one when it converted to a discount theatre. The sound and theatre were fine, it was just a very poor booking which cable probably would have rejected. Had the owner been able to sustain stores I think the Diana would have survived and not been required to convert to a sub-standard discount house. The acreage is now primarily big-box stores (Menards, Home Depot, Target and Jewel-Osco) and doing very well.