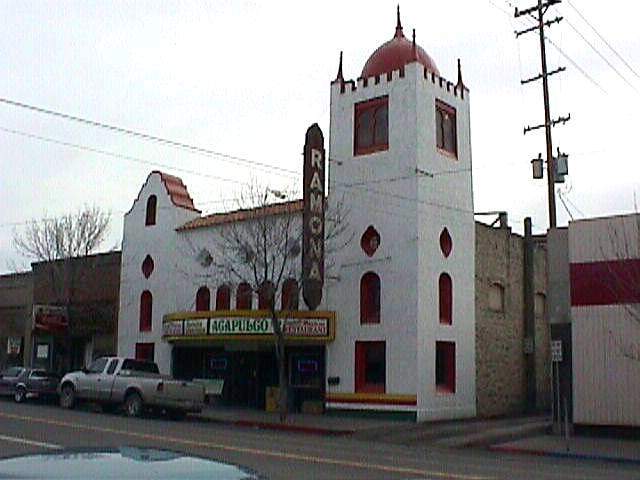 Local history resources say that the Ramona Theatre, with its 11-foot dome, was remodeled into a movie theatre opening June 29, 1928. Harris-Voeller Theatres, which was Idaho’s largest exhibitor during the 1940’s and 1950’s with a peak of 16 locations, operated it for many years. Harris-Voeller also operated the local 200-car Moon Glo Drive-In.

A third-generation showman from the Harris family, Bob Harris, continues the tradition today as the operator of two theatres in Burley.

The Spanish-Moorish style Ramona Theatre, which is now operating as a Mexican restaurant, was put on the National Register of Historic Places in 1976, with Burton Morse listed as the architect.

Here is an undated photo:
http://tinyurl.com/ywkqp9

ronp: I’m wondering if the newspaper you cite was perfectly legible. Is it possible that it actually said Rex, rather than Fox? (Scans of old newspapers are often a bit messy, assuming your source was a scan.) There was definitely once a Rex Theatre in Buhl. It was mentioned in the October 25, 1913, issue of The Moving Picture World. Even if it did say Fox, the Fox might have been the Rex, renamed. It would have been a cheap change for the signage.

Either way, I doubt that this theater had any connection to William Fox. I don’t think the Fox Intermountain chain, which included Idaho in its territory, was even founded until several years after the Buhl house was closed.

Here is another view of the Ramona Theatre building, which also shows the building next door, location of the former Fox (or Rex, or both) Theatre.

The Rex theatre was across the street in a 1918 photo from the Ramona .In 1927 ads in the Buhl Herald were running shows and times for both the Fox and Cozy theaters .

FROM THE … NATIONAL REGISTER OF HISTORIC PLACES ~ NOMINATION FORM ~

The Ramona Theater in Buhl is one of Idaho’s last survivors of the “movie palace” decade of 1920’s. Its style combines Spanish Mission and Islamic elements, suggesting something from the movie sets of the day perhaps those in Douglas Fairbank’s “Thief of Bagdad,” produced in 1924.

Its pink stucco mass is accented with a four story corner tower 41 feet tall, topped by a mosque-like dome. Tall, graceful finials rise from four corners of the tower and the top of the dome. Crenellated battlements finish the tower. Window openings are framed with Moorish arches or Spanish Baroque quatrefoils. A Baroque false gable balances the tower, and other facade walls are capped with red roof-tiles.

Few changes have been made to the exterior, aside from general deterioration of paint and some lost windows. The color was originally light beige,accented with red, green, and pink. On the interior, mural decorations have been painted over and a decorative chandelier removed. There is local interest in preservation and restoration of this unique community landmark.

In January 1928, plans were drawn up by architect Burton Morse for a new theater for the Harris-Voeller Company. The new building was to be on the site of the old Wade building, and parts of the old building built about 1917 were to be incorporated into the new. The wrecking began early in February with the removal of the rear wall, partitions and floors. A new floor was built on an incline. With the partitions gone, the roof and ceiling were supported by a system of four immense steel trusses, leaving no posts in the building.

The Ramona was thought to be very modern in every way, right down to the ladies room off the lobby. The electrical work was done by L. G. Nelson at a cost of $3500. In the operator’s room there were two Motiograph projectors, a spotlight with six different colors and a complete signal system connecting the operator’s room with the stage. On the exterior were colored lights and floodlights to light the dome. Steam heating and air cooling were installed by C. M. McQueary for $3800. Fans brought in fresh air and a complete change of air was made every few minutes. The general contractor was George Stitchter of Buhl whose bid was $22,000. The total cost was expected to run $40,000.

While the new theater was being built, Manager Voeller sponsored a contest to name the theater. The name had to be of Spanish or Moorish character and not more than five or six letters. M. C. McQuivey, a pharmacist at the Buhl Pharmacy, won the contest with the name taken from the novel by Helen Hunt Jackson. The lucky winner won a Lifetime Pass to the theater.

The new Ramona Theater opened on Friday, June 29, 1928 and played to a capacity crowd. The town of Buhl was excited about its new theater and the building was highly praised. (An editorial in the Buhl Herald ended with the statement, “There is little enough of art in this work-a-day world and the beauties of the new theater are thrice welcome. ” June 28, 1928, p. 1). The Ramona is now used only part of the year, and in the summer is often used for live productions by the Antique Festival Theater, with the late Aldrich Bowler.

Also owned by Bruce & Nancy Duffy in the late `80s.