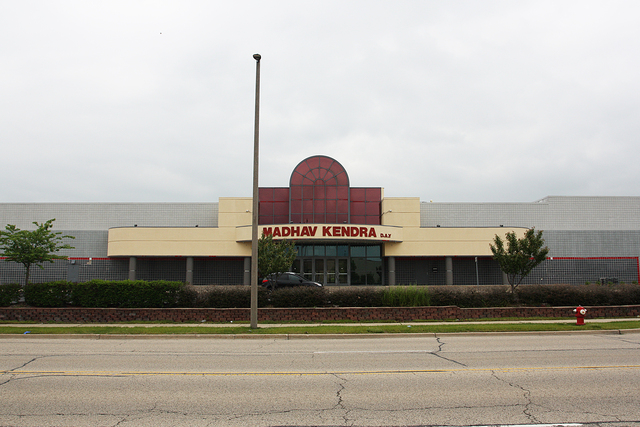 The Streamwood opened in late-1994 by Sony Theatres. The theater was equipped with SDDS (Sony Dynamic Digital Sound). When the theater opened, it had matinees seven days a week, and later in 1996, it was just matinees on weekends only with night shows all seven days.

The theater closed in late-October 2004 and is now headquarters of the Devotional Associates of Yogeshwar.

We are in a weird place in the business when a 10 year old mega=plex is closed.

I too think it’s too bad that this theater is now closed, as I just discovered it today, November 9. I’m curious, though, why is CinemarkFan feeling sad as they admit having never been there?
I haven’t been there in awhile, last attending on August 24 of 2003, as I’ve recently become a big fan of the Charlestowne Mall theaters in St. Charles. Bargain price is only $5, which is everyday til 6 p.m., and its very well run—projection is excellent with a near perfect performance rate, for me at least, in about 40 appearances over the last two years.
But the Streamwood Theater used to be one of my most frequented movie venues, from its opening in 1994 til about 3 years ago I’d usually see between 10 and 25 movies a year there. But it did become very rundown in just a few years of operation and I started going elsewhere for movies more and more. I’m actually amazed it stayed open this long as it seemed to be doing very poor business, especially after the not too distant AMC Barrington opened about 5 years ago, even though the Barrington was more expensive and usually overcrowded.
Anybody there remember any of the theaters on Chicago’s south side in the 50’s and 60’s?

Unfortunately, it appears that this theater will not be reopening any time soon. This item recently appeared in the local village newsletter (March 2005):

The former Loews Theatre is now the home of the Devotional Associates of Yogeshwar, or the DAY Group. DAY is a worldwide organization dedicated to personal improvement and the peaceful acceptance of diversity. The DAY Group recently purchased the theatre at 1500 Buttitta Drive as its North American Headquarters. The headquarters will consolidate 17 metropolitan Chicago locations and serve as meeting place, administrative offices, and a distribution center for the groupâ€™s publications.

This theatre was opened by Sony-Loews, which at the time branded its theatres as “Sony Theatres.” Sony-Loews may have grossly miscalculated on this one. As I understand it, the nearby AMC South Barrington 30 had been “on the drawing boards” for quite sometime and may have already been proposed when this theatre was built.

Sony-Loews and Loews-Cineplex used to have a mini-map in their advertisements showing the location of this theatre. They did the same for the Rice Lake Square.

I saw one movie at t his theater shortly after it opened, I believ it was Crimson Tide. I really was disappointed with the theater. Even though it was new it had VERY small theaters and screens, I don’t believe it had any stadium seating and it was expensive. I much preferred the Barrington 6 and latter the AMC South Barrington 30. I also think the Marcus Addison hurt this place as people from Roselle, Bloomingdale, and addison who used to drive to Streamwood now only had to go to Addison.

It was actually built cooperatively by Loews and Kerasotes and was initially announced as a 16-screen in March 1994. This followed an October 1993 plan by Kerasotes for a 12-screen that was altered after Loews agreed to purchase adjacent land and expand the complex. The 12-screen plan called for theaters ranging from 161-393 seats. By November the screen count had settled at 14. It was also unique in that it wasn’t part of a mall.

The South Barrington plan was not announced until June 1996.

This was one of three local theaters built to similar Sony plans: the Rolling Meadows, the Streamwood, and the Crestwood.

This lawsuit involves labor trouble at the theater in 1998. It was alleged that a flare was tossed in the theater, causing it to be evacuated.
http://tinyurl.com/6a9874

Another one time Loews house.

This would have to rank as one of Chicagoland’s shortest-lived multi-plexs. Among them are: