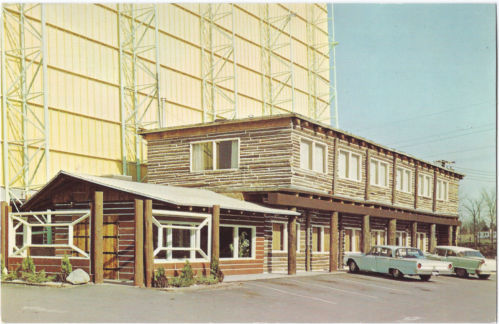 The Phil-Kron Drive-In opened on July 3, 1947 with “Two Guys From Milwaukee”. Its orignal name comes from its first owners, Kenneth Phillips and Phil Kron. The drive-in could accommodate 850 cars, and the large screen tower once contained a restaurant/grill.

In 1957 the theatre was renamed the Drive-In after it was acquired by Kerasotes Theatres. In 1979 it was renamed Kerasotes Drive-In. It was closed on September 13, 1984 when it was destroyed by an arson fire. What was left was later demolished and the site was considered by GKC Theatres for a new multiplex, but it never happened. A shopping center has since been built on the site.

More history here That is not the original screen tower.

The Phil-Kron Drive-In Theater opened on July 3, 1947, with the comedy “Two Guys from Milwaukee.” The theater was co-owned by Ken Phillips and Peter Karonis, and its name was a fusion of their surnames. There was capacity for 800 cars and seating for 400 walk-in patrons.

Opening in conjunction with the drive-in was the Phil-Kron Country Kitchen, an adjoining restaurant that was positioned directly behind the screen.

In 1958, the Kerasotes chain purchased the drive-in and restaurant and changed the theater’s name to the generic “Drive-In Theater,” while the restaurant was re-christened the “Sinorak” (“Karonis” spelled backward).

Both businesses suffered two major fires. The first occurred in 1963 and destroyed both the restaurant and the theater’s screen; however, they were restored and reopened later that same year.

The restaurant closed in 1980 and remained vacant while the drive-in continued to operate. In September 1984, just six days after closing for the season, the theater was damaged again when the abandoned restaurant building caught fire. (Three local youths were eventually charged with arson). The owners made some initial attempts at refurbishing the property, but ultimately decided not to reopen the theater. Meanwhile, the screen remained standing until 1988, when it was demolished by a ferocious thunderstorm that swept through the area.

The final double-feature to play at the theater in 1984 was “Tightrope” / “Sudden Impact.” 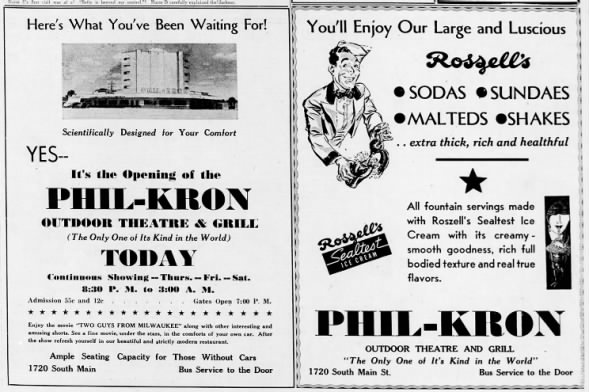