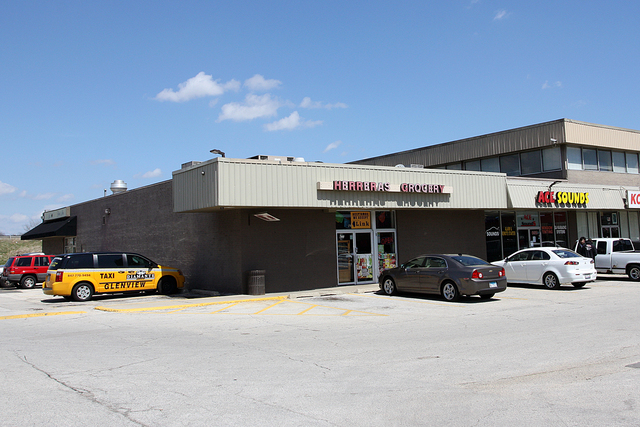 This small single screen theater opened around the mid-1970’s in a building formerly used for retail and was located on N. Milwaukee Avenue, not far from the Palwaukee Airport. It remained in business into the early-1990’s. After closing, the building was converted back to retail use. By 2017 it is a cafe bar.

It was operating at least from the mid-70s; it was kind of a grind house (saw both “Mother, Jugs and Speed” and “Guyana, Cult of the Damned” there). They had revivals of “American Graffiti” for a couple summers, as well as “Girls on the Beach” (retitled “Summer of ‘64”). Most clearly I remember seeing “Car Wash” on a frigid night in February 1977 and hearing about the fatal L train crash on the way home.

Yeah, it was defintely there in the 70s. I saw Star Wars at some point (most defintely a re-release), the PG version of Saturday Night Fever, Grease, and countless kids films (they ran matinees). Some may also remember exiting on to Milwaukee Ave from Palatine Expressway late at night & seeing a cavalcade of costumed patrons lined up to see the “Rocky Horror Picture Show.” They used to have midnight screenings in the late 70s & early 80s.

At the time it was a tiny little theater that you could easily miss as you drove by on Milwaukee Avenue. They had late shows and usually ran reissues or second run.

I do remember seeing the controversial “Caligula” at this theater and being surprised by the outrageous ticket price of $7.50. No other theater in the suburbs would have touched that movie with a ten foot pole.

I believe that ads in the Tribune and Sun-Times circa 1985-1986 billed this as being “The Suburbs' Only Art Cinema” or something like that.

Here is a June 1982 ad from the Daily Herald:
http://tinyurl.com/qrzqdz

I remeber seeing something here. I think it was either Rambo or the Right Stuff, neither of which strike me as beeing art house offerings. Every time I drive by on Palatine Highway I look down at the building where the theatre was and try to remember exactly what movie I saw all those years back.

The owner of the Palwaukee Theater was Leo Marubio, proprietor of Mini-Flix Inc. through which he also owned The Mundelein Cinema and The Prospect Theater. I was the Projectionist at the Prospect Theater. Both the Mundelein and the Palwaukee had automated hour long reels in the booth which the theaters manager operated. His Prospect Theater had the original carbon-arc, 20 minute reel Motiograph projectors and required a full time Projectionist. Leo was a generous and kind man, who cared about his employees and loved film. He wanted so desperately to run his theaters as “art houses”, but booking film back then was very competitive so he had to run far more of the “popcorn” fair than he wanted to. His enthusiasm was infectious. I worked for him in my late teens and he forever imprinted in me a love for film.

The Palwaukee was home to midnight showings of “The Rocky Horror Picture Show” for many years, and I performed here as Dr. Frank-N-Furter from 1983 to ‘84.