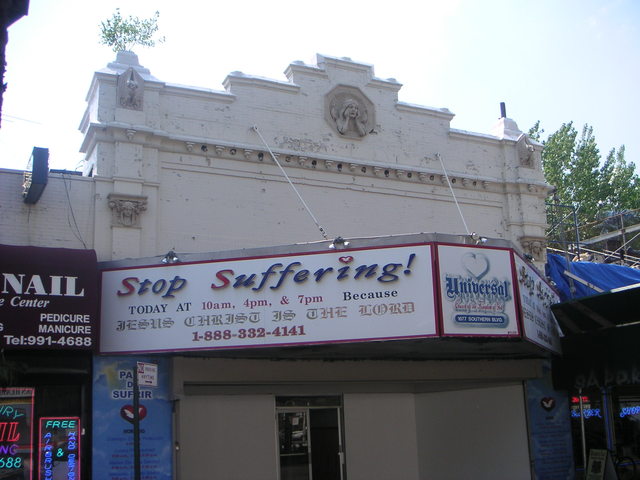 The Art Theatre was opened prior to 1921. By 1944 it was screening Spanish language movies. It was still open in 1950 but had closed by 1957. Later reopened by 1973 as the Art Southern Theatre, it was still open in November 1986. This former Bronx theatre served as a church for many years. By 2019, they had moved out of the building and it stood vacant.

My photos are at http://www.cinematour.com/tour/us/17178.html

Mr. Katz did you have any problems taking photos of this former theatre?4

Not sure what you mean exactly whether it was a physical problem or what. It’s hard to get a good shot because of the elevated train tracks in front. I was permitted to access the inside of the theatre, though.

Mr. Katz, I mean did the church owners let you come inside?

I’m confused here. The Art Theater that I went to in the 1960s was on Tremont and Jerome. Is this a different theater on Southern Blvd. with the same name?

This theater is located right by Westchester Ave and Simpson St.

The first few seconds of this video, dated 1965, show the marquee of the Art Theatre with Spanish language movies featured on it.

The Art was catering to a Hispanophonic audience at least as early as 1944, when the “Theater Deals” Column of the April 14 issue of The Film Daily reported that T&J Theatres had taken a long term lease on the house and would follow a policy of films in Spanish.

Looks like the theater is now unoccupied. The marquee has no lettering on it.

This theater was open until at least November of 1986. Beginning as early as 1973, it advertised in the New York papers as the “ART SOUTHERN,” “ART SOUTHERN BOULEVARD,” or just “ART.”

It is sometimes confused with another Bronx theater located at 1 W. Tremont, near the intersection of Tremont and Jerome, that advertised from 1964-1976 under such names as “ART JEROME” and “ART-Jerome Ave.” (It is listed here on Cinema Treasures as “Jerome Theatre”).