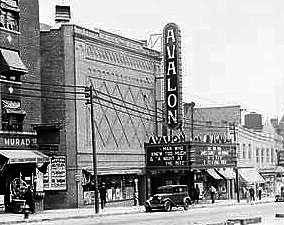 The Avalon Theatre was built for the Consolidated Amusement Company circuit. It opened on 25th January 1928. It closed in April 1950 and was later demolished.

Opened in 1928, an image of the Avalon can be found here:
View link

The most amazing thing about the Avalon photo is the price of the radios in the ad, circa 193x. $179 for a dinky tabletop model? $595 for ‘other models?’ Radio was quite a luxury.

I believe that the ad on the side of the building in the Avalon photo refers to television sets and not radios. Cut off at the top of the picture are the letters TELE, which could easily be part of the word “television”. Also the slogan SEE – HEAR TODAY would make more sense referring to TV’s than radios. I am also of the opinion that the photo was taken some time during the last half of 1948, which was the beginnng of the TV sales push. Also, I am 99 percent certain that the main feature listed on the marquee as playing that day at the Avalon is “Romance On The High Seas” which introduced Doris Day and was released in the New York area in late June of 1948. However, I still have not been able to decipher what the co-feature was that day.

I have still been unable to decipher the co-feature playing that day.

The year and the slogan and the word fragment as well as the exorbitant prices would indicate television — but that illustration is surely a table radio, not a TV.

Assuming both halves of the bill were Warner Bros. releases, I compared the marquee to the entire output (76) of the studio for 1948, according to the IMDB. I couldn’t figure out the bottom of the bill either.

My thanks to Damien Farley for posting a link to the old Avalon pic on my web site. Glad it stimulated some discussion. To see the page the pic comes from, including pics of several still-standing theatre buildings in the neighborhood, click here:
View link

The architect of the Avalon Theatre was Israel Crausman for the Consolidated Circuit of theatres. It opened on 25th January 1928 and closed April 1950.

Which was during the start of the tv era.

especially in the Bronx I bet more movie theaters were done in by the introduction of tv into the American home than the neighborhoods changing.