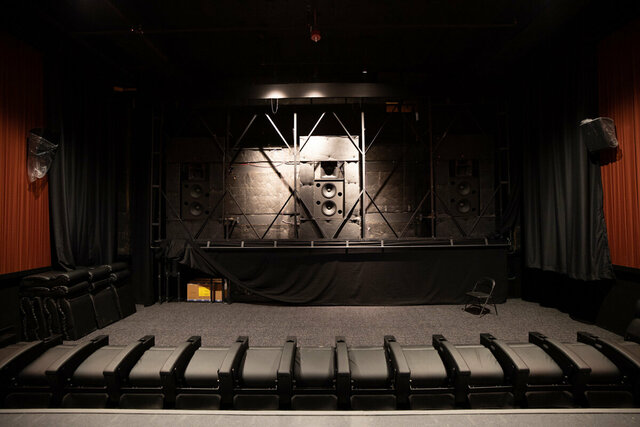 Located in Lower Manhattan, New York. The new Alamo Drafthouse theatre was due to open late-2019. (Formerly known as 1 Chase Manhattan Plaza). It was scheduled to have 14 screens in the basement level. A project of Alamo Drafthouse Cinemas, they declared bankruptcy on March 3, 2021. It has a ‘soft’ opening on October 18, 2021 and the official opening was on October 23, 2021.

Pleas update, rename Alamo Drafthouse 28 Liberty. This theatre is schedule to open soon and Alamo Drafhouse will be operating it. Some personal photos and some construction photos on the web in the photos section.

This complex will have a ‘soft opening’ on Monday October 18th, with showings of ‘No Time to Die’, ‘Halloween Kills’, ‘Lamb’, ‘Venom’ and the Harold Lloyd silent classic ‘Speedy’

Is Alamo still the operator

Can’t believe biggest auditorium is 59 seats. All screens have Sony 4K Digital Laser Projection and Dolby 7.1 sound as per website

Grand Opening ad in photos section. I hope to upload interiors sometime in the next few months.

During the “soft opening” period running through October 21st, guests will receive special discounts on select food and non-alcoholic beverages while staff trains and gets up to speed. Occupying 37,000 square feet on Floor 2B beneath the landmark 28 Liberty Street building in the Financial District, the 14-screen, 578 seat theater is the company’s third New York-area location after Yonkers (2013) and Brooklyn (2016), and the very first in Manhattan. It opens ahead of a string of new Alamo Drafthouse locations due late this year or 2022 in Washington, DC; Arlington, VA; St. Louis, MO; and a Staten Island theater boasting a kung-fu themed video store and bar co-designed and curated by Wu-Tang Clan founder RZA.

“The last eighteen months have been a rollercoaster for our industry, but through it all we’ve believed in the future of this industry,” says Alamo Drafthouse CEO Shelli Taylor. “Opening our Lower Manhattan theater is an expression of our belief that audiences will always seek elevated, communal moviegoing experiences like ours.”

Alamo Drafthouse Lower Manhattan opens amidst an incredible resurgence in the cinema industry that’s seen NO TIME TO DIE, SHANG-CHI: THE LEGEND OF THE TEN RINGS, and VENOM: LET THERE BE CARNAGE open to massive box office success, and just in time for the opening weekend of David Gordon Green’s return to Haddonfield in HALLOWEEN KILLS, Ridley Scott’s action epic THE LAST DUEL, and the acclaimed new drama from IFC, director Mia Hansen-Løve’s BERGMAN ISLAND. The coming weeks at Alamo Drafthouse Lower Manhattan will be see a string of major releases like Denis Villeneuve’s DUNE, Wes Anderson’s THE FRENCH DISPATCH, Edgar Wright’s LAST NIGHT IN SOHO, and Chloe Zhao’s ETERNALS.

The Press Room A museum, a letterpress print shop, a bar, and a private event space all-in-one, The Press Room is a brand new bar concept that’s located within Alamo Drafthouse Lower Manhattan.

Like the century-old wax figure exhibits thoughtfully curated and delicately displayed throughout Alamo Drafthouse Brooklyn’s House of Wax, The Press Room displays selections from a vast archive of over 60,000 letterpress film advertising plates spanning the 1930s through the 1980s. But this collection will also come to life – The Press Room’s 1938 Vandercook letterpress will be inked and ready to be fired up for special screenings with limited edition greeting cards, private events, and classes for anyone wishing to learn the resurgent art of letterpress printing.

In addition to a tap wall of 48 draft beers, guests will be able to customize their own bespoke cocktail or choose from a list of original craft cocktails designed by Alamo Drafthouse NYC Bar Manager, Vince Favella. For more info about The Press Room – including a sneak peek at the menu – visit thepressroom.bar.

Alamo Drafthouse Lower Manhattan Signature Programming Alamo Drafthouse’s programmers have curated a limited series of films drawn from each decade of the past century of films set in and about New York City. “Lights of New York” – a nod to the 1928 film that’s been thought of as the first full-length, all “talkie” film – highlights what’s always been special about New York as a setting for tall tales, epic evenings out on the town, and street-level stories of regular New Yorkers.

And because it’s that time of year, Alamo Drafthouse’s signature holiday programming is just around the corner, kicking off with the much-beloved ELF Movie Party, followed by perennial holiday favorites like PLANES, TRAINS, AND AUTOMOBILES, NATIONAL LAMPOON’S CHRISTMAS VACATION, LOVE ACTUALLY, A CHRISTMAS STORY, THE POLAR EXPRESS, GREMLINS, SCROOGED, BATMAN RETURNS, MEET ME IN ST. LOUIS, and IT’S A WONDERFUL LIFE, as well as genre favorites that include BLACK CHRISTMAS and DIAL CODE SANTA CLAUS, and the LGBTQ+ modern classic CAROL.

Though the auditoriums are small, the screens are decently sized and have excellent sound. Because the screens are oversize relative to the auditorium size, I recommend sitting as far back as possible. And allow lots of time for going down multiple flights of escalators with the theatres one level below the lobby, which is itself three levels below street level.