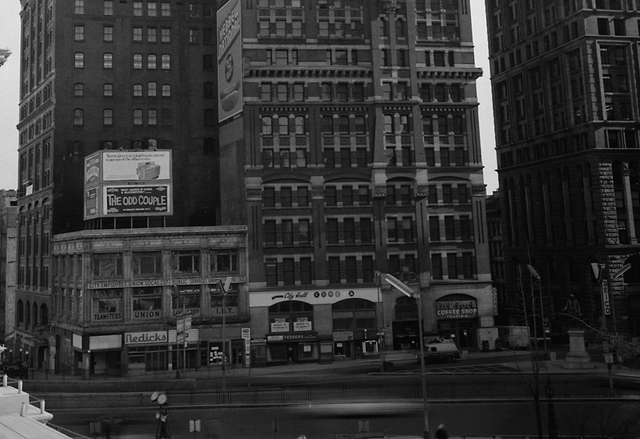 Opened May 1, 1935, the Tribune Theatre occupied space that had been headquarters for The New York Tribune before the newspaper merged with The Herald. Showing late-run double features, the Tribune Theatre did most of its business during daytime, since the downtown financial and government district was nearly deserted at night.

This unknown theater has some significance to me. My older sister took me there to see a Dracula movie when I was just 7 or 8 years old. I’m not sure which one because the theater seems to have screened more reruns than new features. Talk about shock therapy. I have never much cared for horror movies ever since. I need to determine exactly where it was and see a photo of it to purge the demons. lol.

Just added a photo showing that the theater was closed in March 1966.

This clearly proves that the Tribune Theater was renamed the City Hall Cinema and has thrown a huge monkey wrench into my search for the theater nearby that I went to as a kid.

I would greatlu appreciate if any of you folks with your vast historical theater listings can look for a Majestic Theater in this area.

There was a Majestic (Woolworth)further north on Second Avenue. Here

Thanks AlAlvarez, but the one I’m looking for was definately in the City Hall area. Perhaps on Frankfort, Spruce, Beekman, Gold or William Streets.

Could it be the Majestic in Jersey City you are thinking of?

This is crazy! I’m not a movie buff like the rest of you folks and am only trying to determine the movie theater I went to as a child. I’m discovering more than I ever wanted to know, except what I’m actually looking for.

The Original Tribune Theater at 170 Nassau Street closed in 1959 and moved down Frankfort Street closer to William Street due to an expired lease and increased rent. Since it was no longer in the Tribune or Sun buildings and those names were copyrighted, the new theater had a different name. Perhaps after one of the studios – RKO, Century or Paramount. However, it was still referred to as the Tribune Theater.

Meanwhile in 1961 the old theater reopened as City Hall Cinema. Then of course the entire area was demolished in 1966.

Perhaps one of you followers with the proper resources can help me discover the name of this new short lived theater. I know that West Side Story which was released on 10/18/61 played there. Can one of you please check your publications of newspaper movie ads with listings and times for that time period and look for a theater downtown and specifically on Frankfort Street.

Tinseltoes, I’m only able to locate a New York Times article on that date which simply states ‘Theater leased" without the full article.

Can you please post the full story that you found here. Thank you.

OK, Tinseltoes. You can email it to me at: .

The Tribune Theatre was opened by the Springer & Cocalis circuit in 1935. The April 5, 1935, issue of Motion Picture Daily named it as one of four movie houses then under construction by the chain:

“In addition to the Tribune and Court which are now nearing completion, Springer & Cocalis are building two other theatres, one a 1,400-seat house at 204th St. and Broadway, and a second, a 1,200-seat theatre, at Hillside development at Boston Post Road. Both houses will be ready in September.