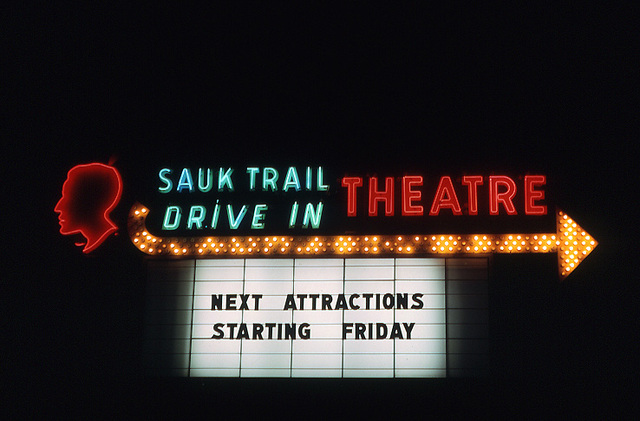 Opened by 1955, this single-screen drive-in could accommodate 500 cars. Its marquee was decorated with an image of an Indian, an homage to the name of the street the theater was located on, Sauk Trail, which was originally an Indian trail between Illinois and Indiana. The drive-in was closed in the early-1980’s, and housing has since been built on the site.

Was the Holiday a drive in? I never heard of it.

The Holiday Theatre was a one-screen indoor movie theatre; it has since been converted into several screening rooms. There is a listing on this site concerning the Holiday.

It parked 830 cars in 1956 and was owned at that time by Sauk Trail Drive-in Theatre Corp.

This was at W. Sauk Trail (Old Lincoln Highway) at Enterprise Park Trail. I uploaded an 1952 USGS aerial photo.

Thanks! This really gives one an idea of how big the Sauk Trail Drive-In was in its heyday. There were – and are – homes to the east of the Drive-In; Once sold, a large amount of homes were built on the site, a senior center, with acreage left available. Whoever designed the new area did a good job and one cannot tell what was in the area in 1952.

Just uploaded a great picture of the marquee from 1965. My father Roman Polys (photo credit) used to produce some of the advertisements that would show during intermission for this drive-in as well as other theaters in the Chicago south suburbs. I remember going to this drive-in often as our family enjoyed having free season passes every year. The pass to this place was a decal that my dad applied to the side vent window of our 1962 Impala.

My uncle owned this drive in and I spent all of my youth there from as early as I can remember until 1977, which was the last year it was open. I have a lot of fond memories of growing up here, I even learned how to drive a car there when I was about 7 or 8. Dave you are correct my uncle gave out season passes that would adhere to the windshield. Learned how to drive a tractor and run the large movie projectors. An interesting tidbit that many may not know is that the movies came on approximately 8 different reals and you had to make the switch at the exact time from one projector to another. The interesting part is to know when to flip the switch which would turn off one and turn on the other, all films back in the day would have round circles pop up on the screen in the upper right for just a couple seconds, this meant to get ready, then there would be another set of circles displayed in the upper right portion of the screen, this is when you would flip the switch so to the viewer it looked seemless. The next time you watch an older movie (prior to 1977 at least), look for the circles to pop up in the upper right hand side, its only for brief seconds so most people never see them, but all the movies have them.

Hey Jeff what was your uncle’s name? I used to go to that theatre all the time. We always got in for free with a pass.

Budlytman, my uncle’s name was William “Fain” Bales. Everyone called him by his middle name, Fain.