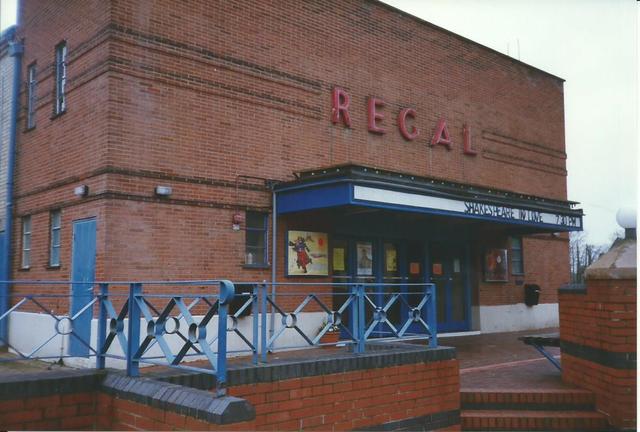 The Regal Cinema was built in 1936 for VEH Cinemas Ltd. and was purely a cinema. It had an original seating capacity of 566.

It was saved from closure in 1972 by the District Council who added a platform stage in front of the screen; together with a dressing room suite at the rear of the building and converted the rear stalls seats (it is built on the stadium plan) into a bar. It is still mainly used for screen entertainment but gets the occasional live one night act or local amateur weeks.

It now has 234 seats, a thrust stage measuring 7.5mtrs by 6mtrs and two large dressing rooms at the rear of the building.

The screen, at the rear of the stage is still housed in the original (though plain) proscenium. An arson fire at the screen end in September 2009, put the cinema out of action for several months. Renovations were carried out and the Regal Theatre re-opened on 3rd March 2010.

Further renovations to the plans of Purcell & Company of Colchester were carried out and it re-opened as a 3-screen multi-purpose entertainment venue on 28th May 2021. The cinema now also boasts a café.

The original seating capacity of the Regal Cinema was for 566.

In May 2007 the Regal had a major makeover with full redecoration, new equipment, carpets and seats as a result of the town selling off the Corn Exchange building. Photos here:–

A fire, probably started deliberately damaged the rear of the building on Wednesday 16th September. The auditorium seems to have had smoke damage only, not structural.

Following an arson attack of the Regal on 7th September 2009 the building was quickly secured against further damage whilst insurance payouts were agreed and then specialist asbestos removal in the damaged area was completed.

The damage was confined to the stage and screen end of the cinema and will cost around GBP 300,000 to repair, but this is almost entirely covered by the insurance policy and by December 2009 the work is progressing.

The main bulk of the auditorium received only smoke and rescue (water) damage and requires redecoration, cleaning of seats and a new carpet.

In the 18 months since opening after a major refurbishment the Regal had build up a good trade, but this interruption will mean starting again to build an audience. Given the comfortable elegant art deco surroundings and the friendliness of the staff, this should not prove difficult.

Theater mentioned, but not by name, in a February 21, 2016 Long Island Newsday article about a wartime romance.