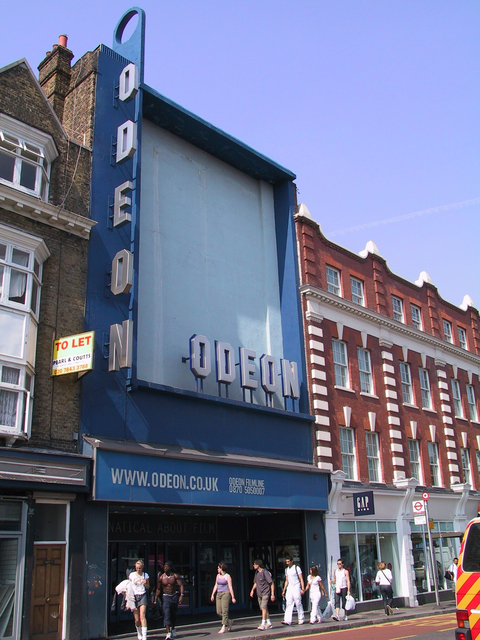 Located in the northwest London inner city suburb of Camden Town. The Gaumont Palace opened 25th January 1937 with Paul Robson in “Show Boat” and James Dunn in “The Two Fisted Gentleman” plus the GB Revels on stage. Built by the Gaumont British Theatres chain as a 2,742 seat, super luxury theatre with full stage facilities, the proscenium was 44 feet wide and the stage 31 feet deep. There were 12 dressing rooms for the artistes and a café/restaurant was provided for the convenience of patrons. The architects were William E. Trent, W. Sydney Trent and Daniel Mackay. The auditorium was wide and decorated with horizontal bands of colour on the walls under a stepped ceiling containing very pendulous light fittings. The screen opening had large backlit grilles with a metal meshwork in front. The Compton 4Manual/10Rank organ was opened by Terence Casey and was on a platform which emerged through an archway at the side of the stage rather than up through the pit.

Initially known as the Gaumont Palace, Regents Park, it was renamed Gaumont (dropping the Palace name and advertising itself in its actual location in Camden Town) very soon after opening. It became an Odeon 1964 ahead of alterations which created a bingo hall in the stalls with a new 1,198 seat cinema in the circle which opened in 1968. The Odeon closed in 1979, was reopened (reduced in size to 434 seats) as the Gate Cinema from 1980 to 1982. Re-opened again, restored to 1,000 seats as the Parkway Kings Cinema in 1983 with another screen being added in the former restaurant area, known as the Parkway Regency (90 seats). Both were closed in 1993 when the lease was terminated. Odeon took back the building and created a 5-screen multiplex in the space, opening on 11th July 1997 as the Odeon. The screens now seat; 403, 88, 226, 88 and 105. Bingo continues in the stalls area.

Just need a bit of clarification.

Was this the first cinema, when owned by ODEON, to get the new Fanatical About Film brand, or is that another cinema?

Anybody know how the building is split into different auditoria here? Specifically, if the circle is still one whole auditorium or if it has been split?

It has been split into (I think) four auditoria, with the 5th in the former Regency space.

But isn’t one screen in a former projectionist’s training auditorium? Perhaps the circle was split into 3, plus the 2 others? I ask only because the few times I’ve been in there, the auditorium I was in looked – at least from side to side – like an original full circle, rather than a split.

You were sitting in the largest screen, an extension of the original balcony from the 1960s conversion.3 smaller screens have been carved out of the rear circle with the fifth screen in the former projectionists training area.

Cinefan, Yes, the rebranding first appeared when the Odeon, Camden Town reopened on 11th July 1997. The new signage, blue and silver livery, reappearance of neon outlining and mission statement: “FANATICAL ABOUT FILM”, created by design consultancy Wolff Olins, were all applied here and it gave the then owners, the Rank Group, the chance to inspect the treatment away from the glare of the West End. There were niggles about the vertical name sign where the two dimensional characters only read correctly when approached from one direction (later solved by being replaced with double-sided letter-bearing signs internally lit) but, on the whole, the designs were considered successful and, over the next few years, were applied – with variations – to every Odeon cinema except York. Ignorance and intransigence on the part of the City of York Council’s Planning Committee meant that, despite two modified submissions to “meet the Council half way”, the Company were not allowed to re-brand that cinema in anything like the new circuit scheme with the result that York Odeon was neither re-branded nor refurbished and closed in 2006. Three years later it reopened as a Reel cinema with standards of comfort and presentation inferior to that of the Odeon chain. The Planning Committee were adamant that the 1937 name sign was part of the building and therefore had to remain. The neon had ceased to work safely many years ago so the ODEON sign remains, rusting and broken – not to mention somewhat potentially confusing.

I know that some of the film Backbeat was filmed at the Odeon Camden Town (playing a cinema in Hamburg). The film came out in ‘94 but does anyone know if it was filmed before or after the cinema closed in '93.

In the early 60’s the Odeon Camden Town also housed the Rank Organisation projectionist training school. If I remember rightly the course lasted 3 weeks before an examination and programme run (no public) before being returned to your own cinema. The students were housed in a B&B in Chalk Farm and travelled daily.