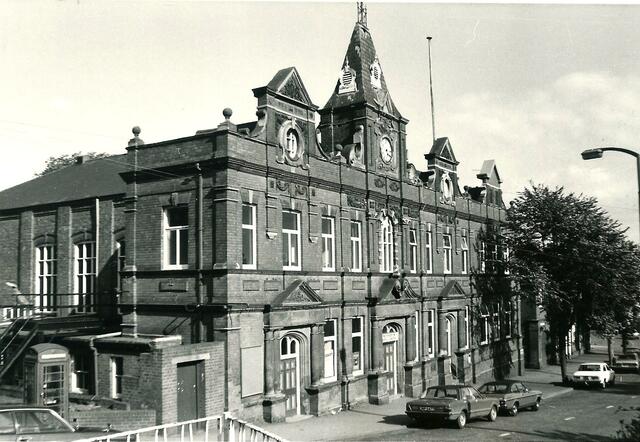 In the Netherton district of south of Dudley, in the West Midlands, the Netherton Institute was a large public building built at the end of the 19th century, after the Countess of Dudley had laid the foundation stone on 5th July 1883.

On 1st January 1910 Howard Bishop obtained a licence for showing films in the Institute’s public hall, which had a few balcony seats in addition to those on the (un-raked) hall floor. At first these were irregular shows, presumably fitting in with other bookings, but they became more regular from Monday 14th November 1910 under the name Netherton Pictureland.

It is believed that the Morrison system was installed when sound arrived; at about the same time, 1932, the name was changed, to the Imperial Cinema.

Howard Bishop died shortly afterwards, and was succeeded by his son, Charles. By this time the Imperial Cinema could only be leased on a one-year basis, so the family built the Savoy (see separate Cinema Treasures entry) which opened in August 1936.

Perhaps surprisingly, this did not lead to the immediate closure of the Imperial Cinema. However, it had closed by September 1939.

After the war, the hall was converted into the Netherton Arts Centre, with Dudley Little Theatre presenting the play “Frieda” at the Civic Opening on 20th October 1947.

Happily, Dudley Little Theatre still presents four plays per season at the Netherton Arts Centre, which is now a 322-seat Victorian theatre available for rehearsal and performance hire by professional and amateur drama/dance etc. groups as well as for private hire for conferences and meetings, celebrations and special events.